Singer-actor Chris Cayzer on intrigues: "If it's not true then I don't pay attention to it." 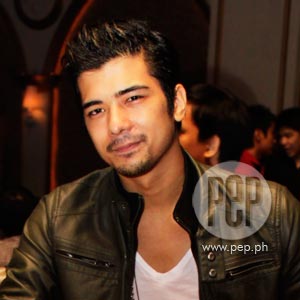 Chris Cayzer is thrilled with the upcoming release of his latest and third album slated before the year ends. "I'm excited and I'm also writing a lot of songs," smiled Chris. He mentioned his desire to come out with an all-original record in the future.

Things continue to look up for singer-actor Chris Cayzer.

The Filipino-Australian performer is scheduled to record a new single today, July 8, in preparation for the release of his third full-length album later this year under Warner Records Philippines.

Chris's first album was produced and distributed by NuGen (an old sub-label of Star Records) in 2006. His second album in 2009 titled The Only Thing was under his present label.

Juggling acting and singing was not on Chris's mind when he first entered the entertainment scene as an aspiring recording artist. But the opportunity to deliver lines in front of the camera was simply too much to ignore, especially since there were offers coming from the networks.

He is currently seen in TV5's teen-oriented program BFGF and the noontime musical-variety show P.O.5.

He was also seen in Star Cinema's romantic drama 2006 film, Close To You, where he portrayed as one of Sam Milby's bandmates.

"Acting just comes along and I like have a two-year contract with TV5 right now so it's doing well," beamed Chris in a conversation with PEP (Philippine Entertainment Portal) last night, July 7, during the Globe and Blackberry Curve event at Republiq inside Resort World in Pasay City.

He added, "I enjoy acting but it's a totally different experience for me. It's a continuous learning process, unlike in singing where I already had a head start since I was doing it even before."

Chris was also included in YES! 100 Most Beautiful Stars for 2010 where he was listed under "The Crooners" category alongside fellow heartthrob singers Geoff Taylor and Jay-R.

"It feels okay to be called beautiful but I'm a guy!" he laughed. "But it is flattering because there are a lot more better looking people than me out there, so it was cool."

IGNORING INTRIGUES. As a songwriter, Chris derives inspiration from almost everything, although personal experiences are still the best muse when it comes to crafting words and melodies.

"Usually my inspiration comes from love and past relationships," said Chris.

The upcoming record, continued Chris, will carry songs touching on past heartbreaks: "This third album is a way for me to show people how I got through."

Being a celebrity makes the Brisbane, Australia-raised singer prone to nasty rumors and nagging intrigues. The most recent are talks questioning his "closeness" to some male friends.

"I just want to live my life. If people want to talk about it, then talk," said Chris, who acknowledged being aware of the rumors being thrown at him.

"Yes, I am aware," he continued. "But I just don't let it get to me because I am here to work. I am here to do what I love doing and that's what's important. If it's not true then I don't pay attention to it. I just pick up the guitar and play away."