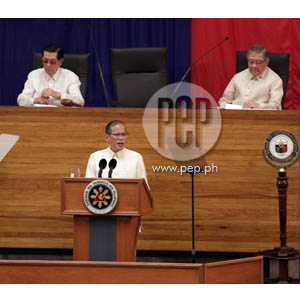 President Noynoy Aquino (middle) delivers his first State of the Nation Address at the Session Hall of the Batasang Pambansa. With him are Senate President Juan Ponce Enrile (left) and House Speaker Sonny Belmonte (right).

Stars did not miss President Benigno Simeon "Noynoy" Aquino III's first State of the Nation Address (SONA). Many were present at the Session Hall, both as guests of politicians or as politicians themselves.

PEP (Philippine Entertainment Portal) was witness to the historical event yesterday afternoon, July 26, monitoring the events as they happened.

Presidential sisters Pinky Aquino-Abellada, Ballsy Aquino-Cruz, and Viel Aquino-Dee were present to support their brother sans Kris Aquino, who is on a vacation in the U.S. with sons Josh and Baby James.

Senator Kiko Pangilinan arrived without his wife Sharon Cuneta, but he told the press the Megastar has lent her support. Sen. Pangilinan withdrew his candidacy for the Senate president a day before the voting.

Former President Joseph Estrada arrived with his wife Loi Ejercito-Estrada. Former President Fidel Ramos also came to witness the historic address. Reports said the two former presidents snubbed each other although they were only a seat apart.

Many attendees dolled up just to attend the SONA—many wore their best jewelry to match the gowns especially made for the occasion. The event had a red carpet that featured guests wearing clothes crafted by the best and the brightest fashion designers in the country today.

"Of course, this is a historical event, so you have to be properly dressed for the occasion," she told PEP.

Other designers with creations at the SONA were Patis Tesoro, Dita Sandico-Ong, Edwin Tan, Edgar San Diego, Uila Cruz, among others.

The guests started arriving at around 1 p.m. President Aquino started his speech at 4 p.m. and ended it at 4:45 p.m.

EXPOSÉS. The topics discussed in his SONA were the fight against corruption and previous instances of fraud in the former administration; poverty alleviation, infrastructure development, abolition of red tape in government, improvement of health care, and the peace talks. (CLICK HERE to read full transcript of the SONA)

President Aquino revealed several exposés in his SONA to stress that his administration will be different from the previous one, which had been fraught with corrupt practices.

The exposé focused on the budget deficit facing his administration, a result of several budget misappropriations Aquino said had been committed under the rule of former President Gloria Macapagal-Arroyo.

These misappropriations were disguised in the release of funds for calamity assistance, as unfair "rewards" to officials in several government agencies, "unplanned" infrastructure projects, and others.

PROMISES. To stamp out corruption, Aquino promised a "zero-based approach," ensuring that the budget is spent wisely.

Aquino also maintained that his administration will continue to prosecute tax evaders and corrupt government officials. He also aims to stop extrajudicial killings.

To boost the economy, Aquino hopes to solidify "public-private partnerships." He said this initiative will be positive for all sectors: education, health, peace and order, agriculture, infrastructure and tourism.

On education, Aquino stressed that the Philippines will aspire for a "global standard" in education, by increasing the basic education cycle from 10 years to 12 years. The PhilHealth program will also be refined to greater serve families who need the most help.

Aquino also vowed to fight for peace in Mindanao and all over the country, by offering peace talks to rebel groups.

Aquino ended his speech by moving his constituents to hope for a better future.

According to Rez Cortez, he remembered Fernando Poe Jr. when he was listening to Aquino's address. Rez is the president of the FPJ for President Movement, which pushed for the presidential candidacy of the late King of Philippine Movies.

U.S. Ambassador Harry K. Thomas Jr. found the speech "outstanding". "The parts I did understand were really outstanding to everyone," he said.

New Congresswoman Lucy Torres-Gomez liked the speech. "It was short but very siksik," she said.

Senator Loren Legarda, likewise, was disappointed that issues on climate change and the environment were not included. "But let's give him a chance," Legarda said.