Gloria Diaz asks Cebuanos to interpret her statement without malice 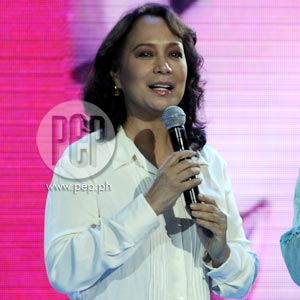 Gloria Diaz expressed her love for Cebu. "I love Cebuanos. I've been with my boyfriend who's a Cebuano for the past 13 years. And I appreciate their lechon, their danggit, and all their beautiful furniture. So I can never say any derogatory remarks about Cebu," she said.

Former Miss Universe Gloria Diaz has insisted that her recent statement about Cebuanos had been misinterpreted. Diaz made the statement when she was interviewed by ABS-CBN's Mario Dumaual, aired on the August 25 episode of TV Patrol. (CLICK HERE to read related story)

Asked to give her opinion of Maria Venus Raj's "major-major" answer during the Miss Universe 2010 pageant, Diaz told TV Patrol that using an interpreter for the Q&A portion of the pageant is a good idea.

"Kasi, when you think about a Cebuana can hardly speak English and, of course, Tagalog, maybe she should answer in Bisaya," the actress explained.

Her statement caused the ire of Cebuanos, and many asked for a public apology from the beauty queen. Cebu Rep. Rachel "Cutie" del Mar even expressed that she was disappointed with Diaz's statement. Shortly thereafter, the Vice Mayors League of the Philippines-Cebu issued a resolution declaring the beauty queen "persona non grata" in their city.

PRESS CONFERENCE. To explain her side, Diaz called for a press conference this afternoon, September 3, at Bowler Restaurant and Bar in Makati City.

Diaz delivered a brief defense to open the press conference.

"They [Cebuanos] did not realize that the interview was edited," she said. "Meaning, may kadugtong, before and after. What I was saying actually was, yes, we need a translator, because all of us somehow are more comfortable in certain languages or dialects."

She added, "My exact words were, 'Yes, I think we need a translator, like if you're a Cebuano, and you're not very good in Tagalog or English, I think you could speak Bisaya.' And then there was a continuation that said, 'Like an Ilocano, should speak in Ilocano. And a Kapampangan, should speak in Pampango.' Because my father was an Ilocano, and he could not speak Tagalog well."

"So meaning, even if you're a Filipino, you don't have to speak in Filipino. You speak in your language or dialect which you are most comfortable and you can speak from the heart. That's what I meant," she said further.

According to Diaz, she was surprised with the large negative reaction she received in exchange of the small statement she made.

Even the "persona non grata" status given to her, she said, is a big surprise. "I think 'persona non grata' should be for murderers, hijackers, child molesters... I don't know what inspired them. But you know, that's life. If they think after my explanation that I deserve to be persona non grata, then so be it!" she said.

Diaz added, "I'm sorry that the Cebuanos thought that I picked [on them]... It was really misinterpreted, hindi nila alam na may kadugtong pa in the back and in the front. I am going to be the last person, I think, to say any derogatory remark about any other Filipino for that matter.

"I was very happy that Venus, who is from Bicol, made it. And I thought her answer was okay, she's never had a problem. It was great! I mean, who am I to say, right? I'm neither a judge nor a jury, so I was happy with [her answer]."

APOLOGY. According to Diaz, she does not think she should be the one making the public apology.

"I don't know if public apology is the right word. I am saddened, I am disappointed, I'm overwhelmed, but I think the one who should do public apology are these people who jumped on the wagon and said I insulted them," she said.

What she's sorry for, Diaz said, was that she was "misunderstood."

"Well, if it's going to settle everything, yes. Okay, Im sorry that they misunderstood me, they did not realize na may kadugtong. I also mentioned the Ilocanos, the Kapampangans, the Chabacanos. I mean, are they all gonna commit me to persona non grata status? Well, what could I do?" she said.

Diaz said she has no plans of filing a lawsuit against Rep. del Mar, or against the Vice Mayors League of the Philippines-Cebu.

"No! There is no point. I don't even know who to demanda," she said. "I am not angry at anybody. I'm just surprised that they should judge me. It's very easy I think, to ask Channel 2 for the entire thing for them to really find out, 'How dare she say those things?' I mean, if I really dared."

Diaz added, "I don't know her [Rep. del Mar]. So I really don't know if I can talk to her. But you know how it is, everybody takes their time out to get their five seconds of, uh, you know, national coverage. No, I don't know her. I'm just getting feedback from my relatives, my daughters, everything. Okay lang.

"Now, I said my piece, will they take it? Will they realize that we've both made a mistake?"

Diaz said she thinks Cebuanos should ask ABS-CBN to give them a copy of her full interview with Mario Dumaual.

"I think Channel 2 could show it to them, but I won't go to Channel 2. I'm not important enough to ask Channel 2 to give me the footage," she said.

"ABS-CBN has been very nice, and they did not realize that it would be taken in that light. That's terrible," Diaz added. "In fact, they never showed it again. They never even brought it out, because they were like surprised. I think they're just as surprised as I am. So, it is a misunderstanding that I hope will be settled soon."

Asked if she expects Cebu to withdraw the "persona non grata" status, Diaz answered, "I think so. If they're smart, and if they understood... I don't know how to say it in Cebuano, but I think so."

She also hopes that Cebuanos "will take what I said without malice, and forgive me for not having it explained earlier. Of course it boggles me, but it's not the end of my life."