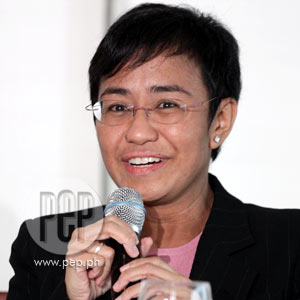 ABS-CBN Vice President for News and Current Affairs Maria Ressa as photographed at the thanksgiving party of Probe Productions on July 4, 2010, at 1Esplanade in Pasay City.

ABS-CBN's News and Current Affairs chief Maria Ressa is no longer renewing her contract, which will expire on January 3, 2011.

Maria Ressa has worked for six years at the Kapamilya network, where she built a reputation for the network's news division as being fair and fearless in its coverage. She left CNN, which had based her in Jakarta, Indonesia, to come home and head the ABS-CBN news department.

But on October 11, she sent her team an internal email saying: "It's time for me to move on." The email was forwarded to the network's corporate communications department, which released it to the press.

The email says that her position will go to Regina "Ging" Reyes, presently the chief of ABS-CBN's North America News Bureau.

Here is the statement of Maria Ressa in full:

"My contract ends on Jan. 3, 2011, and I will not be renewing. I have nearly six months of accumulated leaves so I will go on terminal leave beginning Nov. 15.

"It's time for me to move on, but it's important we transition properly and prepare our organization and its new leader—for the challenges ahead.

"Ging Reyes will be taking over as news head. She will be arriving in
Manila on Oct. 18 to begin our transition. Home-grown ABS-CBN, she has more than twenty years experience as a journalist, the last eight years as North America bureau chief. Please give her your full support as she takes the helm of our multi-platform operations.

"I want to thank you for six amazing, incredible years where we took risks together to help define the future of journalism and our nation. We decided to take a stand and say no to corruption; to embrace the growth of social media; and to join hands with citizen journalists to patrol our votes and our nation . Thank you for your trust and support, for following me even when I tilt at windmills.

"Journalism faces challenging days ahead. Value and protect your editorial independence. I wish you clarity of thought, stamina, and courage to fight for what is right and avoid the compromise of mediocrity.

"You have taught me so much about what it means to be a Filipino. While my time with this company is ending, one of the most precious things it has given me are our friendships, which I hope will continue to grow even when I'm no longer with ABS-CBN."