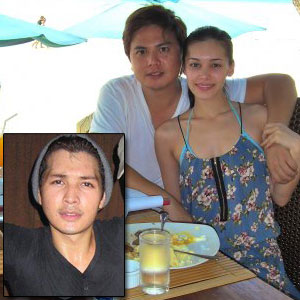 "ALL I WANTED IS AN APOLOGY. EVEN IF HE DOESN'T WANT TO ADMIT HE HIT ME THEN AT LEAST SAY SORRY ABOUT THE SITUATION OR FOR BEING RUDE TO ME IN THE CAB WHEN I WAS JUST ASKING IS HE OKAY," wrote Michelle Bea Paloma (main photo, with boyfriend Rico Gutierrez) in a statement sent to PEP. This is still in connection with Michelle's accusation that fellow model Ryan Fariñas hit her on the head.

"This is my response to their statement:

"I saw what was posted on my wall and the note that was created for others to see.

"If you noticed I deleted things on my wall regarding the issue and did not post anything saying Ryan's name on my page. I did not want this to become any bigger.

"I have been asked over the past few days for an interview and said no to all of it.

"My boyfriend was really mad about it like any boyfriend would be and he started posting things on fb [facebook].

"I did ask him to calm down about it and HE DID. He said no to all interviews as well. I did ask him to take out a lot of the things that were posted on fb because I was getting worried.

"Yes, I have heard about your family and when the incident happened I WAS SPEAKING OUT OF ANGER, BUT NEVER MEANT TO HARM YOUR FAMILIES NAME. Your family is not involved its only Ryan.

"What I said to JC that 'He should take my side' was true. And he said he that night said he is on my side.

"I did tell the story to a friend in Manila the next day because she was asking me what happened. I never said anything about taking my side to her. She said to me on her own "of course I am on your side." I did not say it to anyone else here or in Manila.

"I don't know if he's lying to me or lying to you, but he knew I was I here. He was even skyping me in manila asking me about modeling and he was choosing between Malaysia and BKK. He said to our common friend HE CHOSE BKK BECAUSE HE KNOWS I'M HERE AND AT LEAST HE WILL HAVE A FRIEND.

"He asked me to give him my number and he will call me when he's here. He gave me his email address and I emailed him my number. And when he got here I bumped into him at a casting the day he got here and he said he had no credit that why he couldn't reach me. Ever since that day we were hanging out at least once a day meeting up to eat, texting each other and skyping each other everyday.

"The casting he was waiting for me for 2 hours, I told him he could leave because it was taking so long and he said "no its okay I'm not doing anything else today." I was nothing but a friend to him. I even helped him pick the place he is staying at now. And the friends he has now that are "comforting him" I introduced them to him.

"HERE IS MY SIDE OF THE STORY-

"When we left Circle and we were in the cab, I saw Ryan was upset about something. We got in the cab and he was on my right side. BEING A FRIEND I ASKED HIM 'Are you okay?' and he told me to 'SHUT THE FUCK UP' I was so shocked he said that to me because I did nothing to him and was just asking a question. I said 'ARE YOU REALLY SAYING THAT TO ME?' and he said 'SHUT THE FUCK UP OKAY' and my initial reaction was to hit him out of anger, I didn't just hit him out of the blue. I GUESS HIS INITIAL REACTION WAS TO HIT ME BACK AS WELL. If he was 'blocking my punches' THEN WHY DID HIS CLOSE FIST HIT MY HEAD? AND YES I DID HIT HIM BACK BECAUSE I CAN'T BELIEVE HE HIT ME. Then Ryan got out of the cab and JC ran after him. He called me and said he didn't hit me and I said no he did. And JC said they took separate cabs.

"James, who is new with Stellar, was sitting to my left saw the whole thing. I never told him take my side. As soon as we got back to Stellar he told me 'THAT'S' MESSED UP. I CAN'T BELIEVE HE HIT YOU.'

"I WAS MORE UPSET I CONSIDERED HIM A FRIEND AND HE WAS RUDE TO ME. I guess he's a really good actor because he had me fooled for the past 2 and a half weeks he was my friend here in BKK and even before in Manila when hung out with our common friend a couple times. I don't know how I could really force him to hang out with me.

"There was even a time after Rico left, after he visited me here, I felt so lonely and I told Rico "I feel Ryan is my only friend here." Because I was seeing Ryan almost every single day.

"My agency here has asked me to write down everything that happened and send it to them. I told them, I don't want this to get any bigger. So I DIDN'T.

"ALL I WANTED IS AN APOLOGY. EVEN IF HE DOESN'T WANT TO ADMIT HE HIT ME THEN AT LEAST SAY SORRY ABOUT THE SITUATION OR FOR BEING RUDE TO ME IN THE CAB WHEN I WAS JUST ASKING IS HE OKAY.

"And regarding I am always negative? People that know me, know I am not like that. I am a positive person but also a realist in life. Maybe he seems to think that way BECAUSE IF EVER I HAD A PROBLEM I WOULD TALK TO HIM, BUT I GUESS THAT'S WHAT FRIENDS DO AND HE IS HOLDING THAT AGAINST ME. Yes I have told him things like 'don't say this to anyone' because I talk like that and people in general talk like that. Friends say that to people they trust to not say things. And saying that I do bad things in BKK sounds like I must be really be misbehaving? What have I done here this year? He has told me things about other models here and told me not to say anything. I also know things that I have not said also because I was being a good friend.This goes both ways."