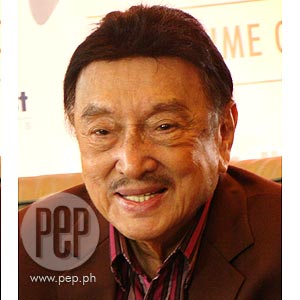 For the first time, in her 25 years in the news industry, Jessica Soho gets to do a one-on-one interview with Comedy King Rodolfo "Dolphy" Quizon.

It takes one icon to make other icons talk.

Now on its sixth year, the multi-awarded Saturday show of GMA-7, presents four Filipino icons and their unparalleled contributions in their respective fields.

For the first time in her 25 years in the news industry, Ms. Soho gets to do a one-on-one interview with Comedy King Rodolfo "Dolphy" Quizon.

The first awardee of the The Grand Collar of the Golden Heart—given by Philippine government under the term of President Noynoy Aquino—talks about the persistent rumors of his death and quips: "Huwag niyo akong apurahin."

The 84-year-old comedian also shares his numerous projects: (1) his return to the recording industry with a new album (2) his two MMFF (Metro Manila Film Festival) 2010 entries, Father Jejemon from RVQ Productions and Rosario from Cine Mabuhay and Studio 5 (3) his weekly anthology in another network.

He says he has no plan of slowing down, and would like to be remembered as someone who has given happiness to his audience.

To date, Regine's list of achievements remains unmatched. And she's going to be Mrs. Ogie Alcasid before the year ends!

She discusses these in the show, plus, her "bra-less" fashion sense in a Videoke session-inspired interview.

For Regine, she wants to be remembered not for her industry achievements but for what she is as a person.

The special all-icon interview will not be complete without the pound-for-pound king, the Pambansang Kamao now Sarangani Congressman, Manny Pacquiao.

After winning his bout against Antonio Margarito, which earned for him his eighth world boxing title, Manny also showed he is not just the king of the ring but also a gentleman.

During his match with the Mexican boxer, he wanted to stop the fight. "Boxing is not about killing people," he said.

The last icon in the list of four greats is also the first Filipino to be recognized in the world of haute cuisine, the incomparable Nora Daza.

Among the first high-profile Filipino chefs and restaurateurs who were able to establish successful restaurants in Paris and New York, Ms. Daza has amazed the palates of some of the royal bloods of Europe and even French actress Bridget Bardot.

She is also the first celebrity chef to have her own cooking show, Cooking It Up With Nora, and to publish several recipe books.