Stars at the EDSA People Power of 1986 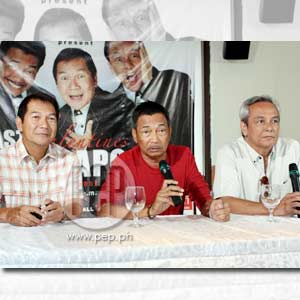 The APO Hiking Society was among the many artists who supported the People Power Revolution in 1986.

Stars will shine later at the the People Power Monument for Tatak EDSA 25, a commemoration of the 25th anniversary of People Power, that happened in 1986.

In 1986, celebrities supported the People Power Revolution by attending rallies and by composing and performing songs. Here are some of the big names who lent their star power on EDSA 25 years ago:

Inspired by the successful revolution, Jim Paredes composed the song, "Handog ng Pilipino sa Mundo." It was performed and recorded by a group of young recording artists then, including Jim's own APO Hiking Society. The APO's two other members are Buboy Garrovillo and Danny Javier.

"Bayan Ko" was a poem composed by José Corazón de Jesús in 1929, and set to music by Constancio de Guzman.

Other celebrities who joined the People Power Revolution were Maya Valdes, Leo Martinez, Heber Bartolome, and, of course, Kris Aquino, who was then 15.