YES!releases list of ABS-CBN and GMA-7 stars who will be showbiz's Next Big Thing 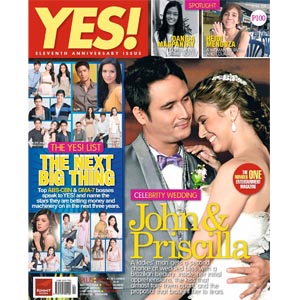 The April issue of YES!magazine spotlights "The Next Big Thing" of the two TV giants—ABS-CBN and GMA-7. There's also a comprehensive feature on the love story of newlyweds, John Estrada and Priscilla Meirelles. For this issue's digital version, visit http://www.yesdigital.com.ph/ or click here

As today's stars are slowly but surely carving a name for themselves, both the audience and the network bigwigs want to know, "Who is the Next Big Thing?"

For its April issue, YES! magazine asks the top executives of ABS-CBN and GMA-7 to compile their chosen list of stars for their networks.

They share their insights with the country's No. 1 Entertainment Magazine on what it takes to build a star. And their knowledge of the industry provides readers a real, educated understanding of the business of star-building: how trends abroad affect star discoveries in the country, how charisma is as important as training and as important as attitude, what role physical attributes play in determining who will play the heroine and the villainess, and so on.

They also take a look at their respective roster of talents and reveal the names of those that their networks will invest money and machinery on to build up in the next three years. Moreover, these executives talk about the plus and minuses of these newbies, the network's expectations of them, and so on.

The result is The YES! List that, technically, is the list of these powerbrokers of the two most powerful television networks in the country today. The List is divided between ABS-CBN and GMA-7, and under each network are the lists of newcomers ("New Names") as well as stars- already-known-but-not-yet-certified big stars ("Sure Bets").

"They cannot stay on the same level, knowing that audiences really look for new faces," Cory Vidanes, head of ABS-CBN TV Mega Manila, says of the mix. "The search for new stars doesn't take away from the bigness of the stars already here, di ba? And that doesn't take away from us pushing them further as we create more stars."

Kim Chiu, Gerald Anderson, Erich Gonzales, and Coco Martin all make it to the Kapamilya station's list of "Sure Bets," while some "New Names" in the same network are Mara Clara stars Kathryn Bernardo and Julia Montes, and reality show graduates Ejay Falcon and Jewel Mische.

For GMA-7, network executives have placed their bets on Aljur Abrenica, Kris Bernal, Barbie Forteza, and Jackie Rice; and identified Paulo Avelino, Rocco Nacino, Bea Binene, and Bela Padilla among their stars to look forward to.

The April issue also features a 28-page special on the wedding of John Estrada and Priscilla Meirelles. Filled with photos of the preparations, ceremony, and reception, the article paints a picture of how the couple met, fell in love, and went on to say "I do."

YES!also spotlights two women of the hour—Danica Magpantay, the first Pinay to bag the Ford Supermodel of the World title, and Heidi Mendoza, the brave former auditor of the Commission on Audit.

Grab your copy of the April issue of YES!, now available in newsstands, bookstores and supermarkets nationwide for only P100.

Be a fan of YES! on Facebook via Facebook.com/yesmagazine.ph.

For this issue's digital version, visit http://www.yesdigital.com.ph/ or click here