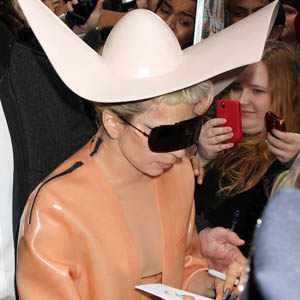 In addition to the $90 million earnings she has accrued over the past 12 months, 25-year-old Lady Gaga was deemed particularly influential due to her millions of followers and fans on social networking sites Twitter and Facebook.

Lady Gaga has officially been named the world's Most Powerful Celebrity.

In Forbes magazine's annual Celebrity Power 100 list, the "Born This Way" hitmaker has beaten the likes of chat show host Oprah Winfrey—who held the top spot for the past four years—teen singing sensation Justin Bieber, and Sir Elton John to top the poll.

In addition to the $90 million earnings she has accrued over the past 12 months, the 25-year-old was deemed particularly influential due to her millions of followers and fans on social networking sites Twitter and Facebook.

A statement from the magazine said: "Lady Gaga tops our power list not just because of her $90 million in earnings, but also because of her 32 million Facebook fans and 10 million Twitter followers.

Meanwhile, Justin Bieber, Katy Perry, and Natalie Portman were among the stars making their debut on the prestigious list at 3rd, 12th, and 75th places respectively.

The spokesperson added: "If this were 10 years ago, Bieber would still be paying his dues in small clubs and schools, but thanks to the Internet, he's a sensation. His first hit song, 'Baby,' has been viewed 500 million times, a YouTube record."

However, Britney Spears and Harry Potter actor Daniel Radcliffe were among the notable names who didn't make it to the Forbes' Celebrity Power List 2011, despite having appeared in recent years.