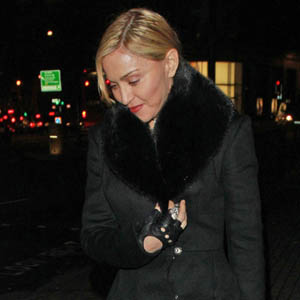 Madonna paid tribute to Oprah Winfrey—who is stepping down from the program after 25 years—saying: "It is no secret that millions of people have been inspired by Oprah and I'm one of those people."

The singing stars joined Tom Hanks and Tom Cruise, Dakota Fanning, and Halle Berry for the first part of a double send-off for the hugely influential talk-show host—once hailed as "arguably the world's most powerful woman" by Time magazine.

Tom introduced surprise guest Madonna as "a viewer from New York City," saying: "This hard-working mother-of-four says The Oprah Winfrey Show means the world to her."

Madonna paid tribute to the host—who is stepping down from the program after 25 years—adding: "It is no secret that millions of people have been inspired by Oprah and I'm one of those people."

Beyoncè appeared and gave a rendition of her new single, "(Run the World) Girls," dressed in a tuxedo bodysuit and backed by a huge team of all-female dancers.

Mid-song, she addressed the host, saying: "Oprah, your persuasion can build a nation. We love you, Oprah. Thank you."

Beyoncè's choreographer, Frank Gatson Jr., later revealed that the star had pushed her team hard to make sure her tribute to Oprah was something special.

He told MTV: "It's amazing. Me, myself, Beyoncè, people of color—we have so much respect for that woman.

"That's why Beyoncè pushed us so hard. She wanted to make sure that Oprah's proud of what she did for her show.

"In Oprah's world, women rule the world, so how coincidental that Beyoncè's song is called that?

"So it was just appropriate, perfection. I loved it. It was great to be there. The energy in that place was unbelievable."

The second part of Oprah's send-off show will be broadcast tomorrow (May 25) in the U.S.