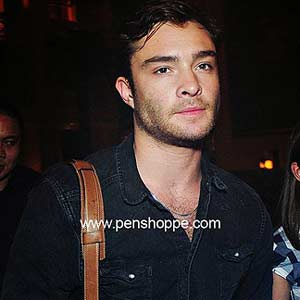 "It's keeping the traditional flow of the Shakespeare's traditional language but it was made a little bite more accessible to a contemporary generation," says Ed Westwick about the adaptation of Italian director Carlo Carlei of the Shakespeare classic Romeo and Juliet. Ed will portray the character of Tybalt, the cousin of Juliet, in the movie.

The 23-year-old actor, who plays the role of Chuck Bass in the hit American TV series, will portray the character of Tybalt, cousin of Juliet (to be played by True Grit's Hailee Steinfield), in this rendition of Shakespeare's classic tragedy by Italian director Carlo Carlei.

The British actor related how excited he is about his new role during the media junket prepared for him by the local clothing brand Penshoppe, which he is endorsing, at Salon de Ning, The Peninsula Manila in Makati City last night, June 2.

"[I'm] really excited. We got a really, really great script," he said.

Then he gave a few hints about the plans for the movie.

Ed said, "It's keeping the traditional flow of the Shakespeare's traditional language but it was made a little bit more accessible to a contemporary generation.

"And yeah, it's going to be fantastic. Hailee Steinfeld is playing Juliet, very talented actress. And I get to play the wonderful role of Tybalt, the cousin of Juliet.

"It's going to be an amazing time. We're going to shoot in Verona, which is one of the oldest parts of Italy.

"We'll get to bring probably the most famous story of all time back to life."

Although this will be another villain role for Ed, he assured that his approach is going to be different from the character he's currently portraying in Gossip Girl

"You know, I'm still figuring that one out. I'll put it all together. I'll put a little time on it before I start working," Ed said.

He added, "Well, you know I think each character has to be created visually.

"You know, we have certain different established fictions with Romeo and Juliet. You know, it's been a legend.

"It's gonna be very different."