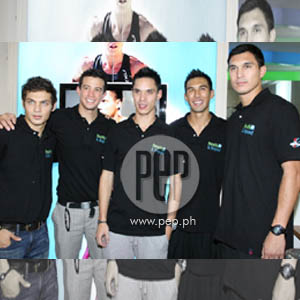 The Philippine Azkals may have lost their chance to compete in the 2014 FIFA World Cup, but they will continue representing the country in the international football scene.

PEP.ph (Philippine Entertainment Portal) was able to talk to some of the members of the national football team during the store opening of Health and Beyond at the Rockwell Powerplant Mall in Makati City last Friday, July 29.

Defender Anton del Rosario said that while the result of their second match against Kuwait Al-Azraq was disappointing, he acknowledged that "Kuwait is a great team. They are more than 50 places above us and have more experience. They've all been playing for a long time and they're all playing professionally."

He would also like to think of their defeat as an inspiration for the team to improve.

Another defender Rob Gier agreed, "I really think there's a lot of things to improve on. But we're taking steps towards the right direction now."

Midfielder Simon Greatwich, on the other hand, thinks this is just one of the challenges for the team.

He said, "I guess we can't dwell on it and we have to pick up for the next game.

"We know it's tough to bring it back, but we know that we could definitely still do it."

Fellow midfielder Nate Burkey also wanted to stress that despite what happened last Thursday, there were still a lot of things about the team their supporters could be proud of.

He said: "It's still a disappointment. It's a lost and, you know, we're out of the World Cup qualifying game. But, you know, we have to keep our head high because it's our biggest accomplishment."

Defender Jason Sabio, who came to the store opening to support his teammates, also said, "We fought hard. Kuwait's on the good side. But, you know, we have much, much improved from seven or eight months ago.

"I think we've grown more than what we've expected.

"It's a learning experience. Now we know what we need to work on and, you know, what we should improve on to get ready for the upcoming tournament."

The members of PHL Azkals are set to go on vacation for a month before they resume training. The team will prepare for the annual Long Teng Cup in Taiwan in late September.

ON THE CONTROVERSY. Meanwhile, PEP also took the chance to ask three of the four members of PHL Azkals whose names were dragged in a recent controversy.

It will be recalled that Anton, Simon, Jason, and goalkeeper Neil Etheridge were linked in an alleged gang rape case. The supposed victim was female model Amanda Coling, who claimed her career has been affected by the issue.

After the Azkals' disappointing match against Kuwait, some believe the issue could have affected the performance of the team.

However, Anton does not think so. He told PEP, "I mean, we're all professionals, we're all focused on the game, that's all that matters.

"Also, this issue, it's obviously not an issue. We don't think about it. There's nothing to talk about."

Jason, on the other hand, said this did not cross his mind while they were preparing for the game. "Well, honestly, I put it at the back of my brain because, you know, I want to focus on our game against Kuwait."