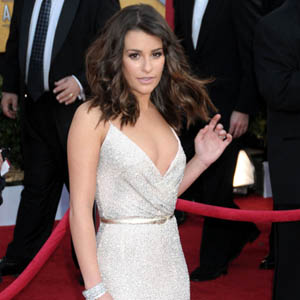 "I was shaking. I was so nervous. I was just shaking and shaking," says Lea Michele about meeting her crush Taylor Lautner.

Lea Michele was so nervous about meeting Taylor Lautner, she was "shaking."

The Glee actress met the Twilight Saga hunk for the first time at the Hollywood Foreign Press Association's (HFPA) annual luncheon at the Beverly Hills Hotel yesterday (August 8) and worried he might think she was "crazy" when they posed for pictures.

She said: "I was shaking. I was so nervous. I was just shaking and shaking."

Speaking about posing for pictures together, she added: "I told him it was going to be our wedding picture. He is going to think I'm crazy."

Lea—who is best known for playing Rachel Berry in Glee—admitted she would love to see Taylor appear in the musical drama series.

However, Taylor is not so keen on the prospect, admitting his musical talents are limited.

He said: "I definitely can't sing. That would be a nightmare."

Another fan of Taylor, 19, is Mark Wahlberg, who admitted he is expecting the star to be taking on the roles previously offered to himself and Leonardo DiCaprio.

He told Leonardo: "I am sitting at a table with a gentleman who is better looking than you and is in better shape than me. So, we're both out of a job, dude. Taylor Lautner! We're screwed.

"It's over, dude. Titanic and Boogie Nights were a long time ago. I accept it. I had a good run and on to the next."

Taylor admitted he is overwhelmed by the praise he received.

He said: "I don't even know the word to describe being here. So odd. It's such an honor. I'm up on the stage and talking in front of people like that? The people that I looked up to my entire life? Hearing words like that from Mark and everybody — it's just really surreal."

Other stars at the event—which saw the HFPA hand over $1.6 million in financial aid to film schools and nonprofit organizations—included Gerard Butler, Kevin Bacon, Elisabeth Moss, and Hugh Dancy.