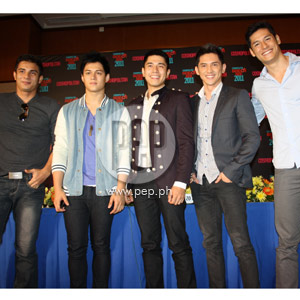 (From left) Ejay Falcon, Enrique Gil, Paulo Avelino, Ahron Villena and Hideo Muraoka are some of the celebrity centerfolds chosen by Cosmopolitan Magazine. The other centerfolds for 2011 include Aly Borromeo, Anton del Rosario, Enzo Pineda, Phil and James Younghusband.

Expect a "naughty nautical" theme when viewing the sexy photos of this year's batch of Cosmo hunks.

Phil Younghusband was chosen to be on the cover of the Cosmo Men supplement that is included in the September issue of Cosmopolitan Magazine. The famous football player shows off his well-toned body while posing in front of yachts anchored near a port.

Meanwhile, American reality TV star Kim Kardashian is on the cover of the regular issue.

Why did Cosmo choose the Fil-British striker of the Azkals to be on the cover?

"This is the time of the Azkals," declares Cosmo editor-in-chief Zo Aguila. "Considering that Phil is really the biggest name for the team, we felt that it's very timely that we choose them to headline this year's Cosmo Men supplement. Add that to the fact that he is highly requested by a lot of Cosmo chicks, we really felt that the timing was perfect."

Aside from Phil, his brother James, and fellow teammates Anton del Rosario and Aly Borromeo also made the cut as centerfolds.

The Cosmo Bachelor Bash is slated to take place this Thursday, September 15, at the World Trade Center.


COSMO HUNKS. This marks the second time that Ejay bared his body for the magazine since he posed as a celebrity centerfold in 2009.

Enrique Gil, who is currently 19 years old, sheds his teenybopper image for a more mature look.

Paulo Avelino says that at the time of the Cosmo pictorial, he was "floating" or undecided whether to transfer switch networks or not.

Azkals Neil Etheridge and Simon Greatwich were also featured in the pages of the supplement.

Singer-actors Jaco Benin, Geoff Taylor, Markki Stroem and Vincent Bueno bared their muscular bodies for the publication as did other celebrities such as Benedict Campos, Rodjun Cruz, Mike Tan and Manuel Chua Jr.

SEXY PICTORIALS. According to Cosmo editor-in-chief Zo Aguila, they had difficulty scheduling the pictorial of the Azkals since they were busy training for their football games.

PEP.ph (Philippine Entertainment Portal) asked the centerfolds about their sexy pictorials and the hunks candidly narrated anecdotes about their experience.

Paulo bared his muscular torso and posed with a towel covering his private parts. He admitted, "Sa akin kakaiba kasi they made me wear underwear then after choosing, we were about to shoot when they told me, 'O, dapat hindi kita, ha.' It's something new and exciting and a more daring thing to do."

For Hideo, he described the experience as "very nice."

IDEAL GIRLS. Ejay, Enrique, Paulo, Ahron and Hideo Muraoka were also asked to reveal the qualities that they look for in a girl.

Hideo: "For me, I think I want someone to have good conversation with coz I think communication is very important. I don't care about looks...either short or long hair or skinny."