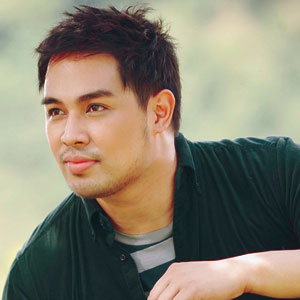 Jed Madela recalls that his father was opposed to him joining singing contests in the past. But now his father is very supportive of his singing career.

Jed Madela, a veteran of singing contests—including the 2005 World Championship of the Performing Arts (WCOPA) where he won all the major awards—has never been tapped to mentor or judge in a TV talent competition.

At this point in his career, the realization of that simple dream could very well be a fitting feather in his cap.

"Hindi nila ako kinukuha, e," he pointed out during an interview at the October 13 launch of his seventh and latest album, Breathe Again, referring to the people behind the talent searches being aired on television.

And what kind of judge would Jed be?

"[I'll be] straightforward," he replied.

"But I'll say [my comments] in a nice way. Hindi ko naman papahiyain.

"I've been there. I know how it feels to be criticized and to be dumped. It hurts.

"Ano ba? I'm not a model or a pin-up artist na tinitingnan lang."

With patience and perseverance, Jed was able to make people, even those doubters, take notice of him.

"'Yun lang talaga. And it will always be my pride."

LOVE FOR MUSIC. That's why if ever he finally gets his wish of judging in a singing competition, Jed said he would focus on how the contestants express their love for music in their performances.

However, the singer noted that this generation's competitions no longer focus on singing alone.

"Now, it's not just about the voice but also the look, the popularity, yung aura mo sa tao—the total package.

"It's both a good and a bad [development].

"Sometimes, we forget what is more important. Is it the voice, the talent, or personality na lang?

"We take for granted that every Filipino is a good performer because we look for something different, na pag-uusapan, may edge.

"Depende rin sa sitwasyon. Like in the case of Susan Boyle. Even [Britain's Got Talent judge] Simon Cowell was mocking her at first."

NO STORY TO TELL. Jed's days of joining contests are over, but even if he's still an upstart now, he said he won't try his luck in today's talent search.

"Ayaw niya kasi dati na maging singer ako. Akala niya I was looking for a job as a flight attendant here in Manila.

"So, when he found out the truth, he brought me back home to Iloilo.

"I joined a band and I went back to Manila."

Now, the singer whose unmatched WCOPA feat has given him wider reach and acclaim considers his dad his biggest fan.

FOLLOW YOUR DREAM. Needless to say, Jed urges singing hopefuls to follow their dream. He especially enjoys it if newbies like Star Power winner Angeline Quinto and her fellow finalists ask him for advice.

He also finds fulfillment in training our representatives to the annual WCOPA and seeing his cousin—whom he mentors—triumph in other competitions.

It's small wonder then that Jed, with his willingness to pay it forward, has come this far—and will go even further.

JED THE SONGWRITER. While still promoting his latest recording Breathe Again, Jed is already thinking of putting out a new one that will showcase his songwriting skills.

He explained that one of his compositions was supposed to be a track in his current CD but his label, Universal Records, deemed it wise to showcase it along with his other creations in a future album.

Just the same, Jed is proud of Breathe Again.

For starters, nine out of 14 cuts are original works of Filipino and Malaysian songwriters.

"I've done six albums na puro cover," said the singer best known for the revival of past hits "How Can I Fall," "The Past," "The Search is Over" and "Love Always Finds a Way."

Jed clarified that the title track is not that Toni Braxton tune. It is an original penned by Lin Li Zhen that talks about love's ups and downs and joys and pains.

He added that aside from romance and heartbreak, the rest of the songs speak of inspiration, encouragement and friendship.