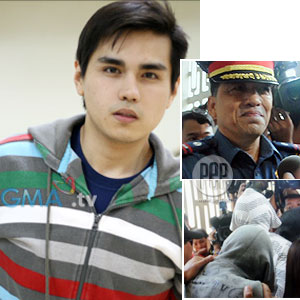 "One hundred percent po kaming naninindigan—ang imbestigasyon namin—na sila nga ang may sala," Chief Inspector Enrique Sy (inset, top) says on what his team has uncovered in the murder case. The Task Force Ramgen head is certain that Ramon Joseph "RJ" Bautista, Ramona Bautista, and the other suspects have a hand in the killing. Suspects Michael Nartea and Roy Francis Tolisora (inset, bottom) have their heads fully covered.&

A new witness presented by the Parañaque City police today, November 8, corroborated the lineup of suspects the police have named in the slaying of actor-politician Ramgen Revilla.

Comeda is named as one of the hired killers of the 23-year-old Ramgen, who was murdered on the evening of October 28.

The preliminary investigation of Nartea and Tolisora was postponed for tomorrow, November 9, due to the absence of the two suspects' legal counsel.

PRODUCTION ASSISTANT'S TESTIMONY: The task force also handed over to the prosecutor's office the death certificate and post mortem documents of Ramgen.

Angcajas's statement confirmed a rift between Ramgen and RJ, saying their dispute was over money and cars.

In a news item by The Philippine Daily Inquirer today, Angcajas narrated that the conflict between the two brothers started when RJ, 18, sold his relatively new Mitsubishi Strada for P800,000.

Ramgen, who was reportedly using the car often, felt shortchanged and told on his younger brother to their father, Ramon Revilla, Sr.

This, in turn, got former Senator Revilla, Sr. displeased with RJ.

Revilla, Sr. reportedly tried to teach RJ a lesson by not paying for the down payment of a new Mitsubishi Montero that RJ had purchased through the sale of the Strada.

Ramgen and RJ were said to have been in bad terms since that incident.

During the task force's submission of Angcajas's testimony this afternoon, Chief Inspector Sy said that the production assistant's statements prove that the motive of the crime was the quarrel over money and cars.

The complaint filed against him has been raffled off among the judges of the Parañaque RTC (Regional Trial Court).

The case will be presided over by Judge Fortunito Madrona of Parañaque RTC Branch 274.

RJ no longer went through a preliminary investigation, or inquest.

His counsel, Atty. Dennis Manzanal, waived RJ's right to this phase of the litigation when he filed a motion seeking his client's release due to his client's illegal arrest.