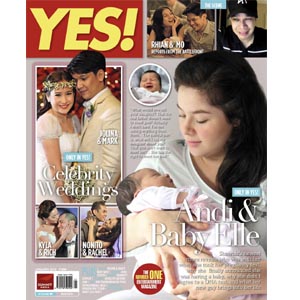 The January 2012 issue of YES! magazine, featuring Andi Eigenmann and her baby on the cover, is available in newsstands, bookstores and supermarkets nationwide for only P100. You can also become a fan of YES! on Facebook via Facebook.com/yesmagazine.ph. A digital version of YES! is available for international subscribers, visit PEP.ph for subscription details.

Much has been said about Andi Eigenmann in the past year.

While her unplanned pregnancy left her abandoned by the baby's father, Andi braved the nine-month storm, with her family rallying behind her until she gave birth to Adriana Gabrielli, or "Elle" for short.

Five days before her due date, Andi found time to sit down with YES! magazine for an exclusive interview, which is the basis for the feature on her in the January issue of the country's number one entertainment magazine.

It also walks us through the first moment that Andi discovered she was pregnant—a moment she shared with the "baby daddy" whom she refuses to name on the record, but whom many speculate is her ex-boyfriend Albie Casiño—down to her first weeks as a new mother.

Andi also talks lengthily about her failed relationship with the "baby daddy" and how, despite knowing about her condition, he never made an effort to check on her throughout her entire pregnancy.

She does, however, acknowledge that it's her child's right to meet her father. "For my baby, I won't deprive her of that, because that's her right... Kawawa naman siya. She has a right to meet her dad, so I'm just hoping for that."

Andi opens up to YES! about how she's raising her newborn child and her dreams for Baby Elle.

Fully prepared to raise Baby Elle on her own, Andi says, "I can just try my best and make sure that I won't give her a reason to need her real dad."

The January issue of YES! also features the weddings of Jolina Magdangal and Mark Escueta, Kyla and Rich Alvarez, and Nonito and Rachel Donaire.

It also gives you a deeper look into the Rhian Ramos and Mo Twister scandal that is rocking local showbiz.