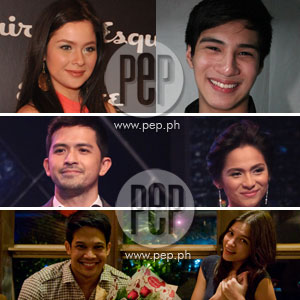 That is according to astrologers, who also warned that those who "try to force the issues and make things worse will achieve nothing, or will just ultimately fail."

Could this be the reason why the relationship of Jennylyn Mercado and Dennis Trillo ended in a muddled heap?

The ex-couple parted ways, far from amicably, in March.

Igniting the feud was a heated exchange between their managers Becky Aguila and Popoy Caritativo.

And adding fuel to the fire—claimed the pro-Dennis camp—was the tell-all interview of the first female StarStruck Survivor with YES! magazine.

The result: Seven months later, both have moved on with their separate lives, but neither seem ready to bury the hatchet.

Similarly, the love story of Mo Twister and Rhian Ramos came to an "ugly" end.

Even before they could officially admit their relationship, their split was announced on Twitter by Mo himself last April.

But that, it turned out, was just the tip of the iceberg.

From angry tweets on social networking sites, the Mo-Rhian breakup has been elevated to a court battle, with the Kapatid host crying "abortion" and the Kapuso actress crying "harassment."

In addition, the motormouth Paparazzi host has relocated to New York, while the controversial teleserye star has announced her hiatus from showbiz.

Andi Eigenmann is another story.

As events played out, the "cheater" tweet of young star Albie Casiño last May was just a prelude to a full-scale fight with his girlfriend, the equally young star Andi.

A month later, the Agua Bendita star admitted to being pregnant, and much later disclosed that Albie is the father of her baby.

Even after she gave birth last November to a beautiful baby girl, whom she nicknamed Elle, she and the alleged father of her baby were still not on speaking terms.

Andi's parents Mark Gil and Jacyln Jose, though estranged themselves, have given their daughter their full support. Albie's mother, who is not from showbiz, has said she welcomed a DNA test to prove the baby's paternity.

But Andi's mom has said, "Walang mangyayaring DNA!" Andi's dad, for his part, has said the fellow was not welcome into their family.

Andi herself feels conflicted: she is still angry and hurt by the boy she calls Elle's father, but she also believes her baby must know her father.

Showbiz this year overflowed with real-life drama—some of them evolving into sagas.

The characters were more upfront, bold, and raw.

Most stars chose to "force the issue...," and in the end achieved anything but reconciliation.

Here's a look back at the first six months...