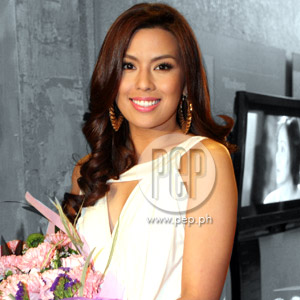 "Kaya ko ba ito? Kontrabida? I've never done it before and it's something new."

She knew that accepting the character of a villain would compel her to be someone she has never been known as—a mean girl.

"Even in real life, my friends can attest to the fact that they've never seen me in any, kumbaga, catfight or whatever," Nikki says with a chuckle.

Nikki is not about to back down from this challenge.

Apart from feeling blessed and privileged that she gets to work with seasoned actors Eula Valdes, Tessie Tomas, Sylvia Sanchez, Pinky Amador, and Allan Paule, the 24-year-old artist is determined to get what she can out of the experience.

PREPARING FOR HER ROLE. At the show's grand press conference last night, January 18, 2012, held at ABS-CBN Network's Dolphy Theatre, Nikki relayed how she prepares for her role.

"Siguro kanya-kanyang ano na lang, diskarte, dahil yun na nga, I've never really experienced going up to someone and being, forgive the word, a bitch to a person."

How did she go about it?

"Madami akong pinanood dahil nga, as I mentioned earlier, what experience I lacked doing the teleseryes, because I do it very rarely, I had to make up for in research.

"Pinanood ko yung original just so I understand the background.

Nikki is referring to the original movie, Mundo Man Ay Magunaw, shown in 1990. The film starred the loveteam of Sheryl Cruz and Romnick Sarmenta.

SLAPPING SCENE. In the trailer of Mundo Man ay Magunaw, Nikki's scene with young actress Empress Schuck shows her, while in character, slapping the face of her sobbing co-star.

Nikki recalls how she politely warned Empress of the slapping scene prior to the shooting.

While the equally beautiful Empress took no offense, Nikki adds, "You know what? Yun siguro yung beauty of working with professionals like Empress, of course Ms. Eula, and everyone else.

"Yung mga, kumbaga, kasama, yung mga part and parcel of the business and of being an actress."

Rechie del Carmen, who co-directs the soap with Jeffery Jeturian, admits that motivating Nikki in that particular scene was trying.

Whatever their difficulty, Nikki was able to deliver.

PROTAGONIST VS. ANTAGONIST. Will Nikki assume more antagonists' roles from now on?

The actress—who has mostly done protagonist roles in stage plays such as Sweet Charity and Legally Blonde—says that she does not mind.

She further expresses, "Siguro ang sarap ng buhay ni Ms. Eula na every once in a while, she gets to play kontrabida and then minsan mabait."

Nikki, while hardly experienced in television acting, says that her theater background helps.

"Ako siguro, I would like to thank the theater world for what little background I have in terms of acting.