Demi Moore released from hospital after reported seizure; Ashton Kutcher rushes to be by her side 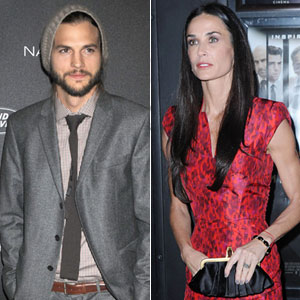 Demi Moore was rushed to hospital on Monday night (January 23), after suffering a reported seizure at a birthday party she was hosting at her home. Demi's estranged husband, Ashton Kutcher, rushed back to Los Angeles from Brazil to support Demi.

Demi Moore has been released from hospital.

The actress was rushed to hospital on Monday night (January 23), after suffering a reported seizure at a birthday party she was hosting at her home, and it has now been revealed by E! News she is no longer being treated at Sherman Oaks Hospital in California.

However, it is not yet known when Demi—who was visited at the facility by her daughter Rumer on Tuesday (January 24)—checked out.

The Two and a Half Men actor—who split from the actress in November amid allegations he had cheated on her—was said to be "deeply concerned" about his estranged wife after hearing she had been taken to hospital to be treated for exhaustion.

Flying back from his stint at Sao Paulo Fashion Week last night (January 26), Ashton is said to have been increasingly worried about the state of Demi's health.

A source told People magazine: "Ashton is deeply concerned for Demi. He still cares about her and wants the best for her."

Following her hospitalization, Demi's spokesperson claimed the seizure was caused by stress and claimed she was being treated for exhaustion.

The spokesperson said: "Because of the stresses in her life right now, Demi has chosen to seek professional assistance to treat her exhaustion and improve her overall health.

"She looks forward to getting well and is grateful for the support of her family and friends."

However, it has been alleged Demi—who was previously married to Bruce Willis—was hospitalized because of anorexia and substance abuse problems.

It has now been claimed the Striptease star has been abusing Adderrall—an amphetamine salts-based medication which is only legal in the US and Canada and which is used to treat attention-deficit hyperactivity disorder and narcolepsy.

A source told RadarOnline.com: "Demi has been taking Adderall and drinking energy drinks and starving herself and those are some of the serious causes that led her to collapse on Monday night.

"The pills and starvation destroyed Demi and this has been a problem for about a year."

It is being claimed the 49-year-old actress had replaced food with caffeine-based energy drink Red Bull.

A friend of the star told The Sun newspaper: "Demi avoids alcohol and instead drinks tons of Red Bull when she goes out. But in recent months she's not been eating much, so she's also been drinking it in the day to give her energy to get through."

Demi—who was reportedly released from California's Sherman Oaks Hospital last night—"seemed drunk" when she was admitted to the medical facility on Monday, but it is thought it was just because of the vast quantities of Red Bull she had consumed.

The pal added: "She seemed drunk but I don't think any alcohol passed her lips, just loads of Red Bull. It's not a healthy way to live."