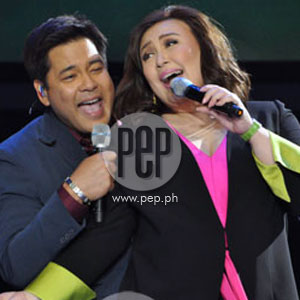 Concert King Martin Nievera and Megastar Sharon Cuneta joined forces for a heartwarming and an entertaining pre-Valentine concert dubbed Once In A Lifetime, and held at the Smart-Araneta Coliseum last February 11.

But they just did that for their Once In A Lifetime concert held last Saturday, February 11, at the Smart-Araneta Coliseum in Cubao, Quezon City.

Sharon and Martin, who call each other "vocal soulmates," proved that their tandem click superbly.

Before they appeared on stage, an audio-visual presentation (AVP) of the two superstar singers rehearsing for the concert and talking about each other was shown on the big screen.

Then, Martin and Sharon opened the concert with a medley of "The Promise (I'll Never Say Goodbye)," "The Last Time I Felt Like This," and "Sweet Love."

After their duet, the two talked about their past relationships.

While remembering the happy and sad memories of their relationships through song after song, an AVP—showing Sharon's old pictures with ex-husband Gabby Concepcion and Martin Nievera's with ex-wife Pops Fernandez—was shown on the big screen.

At one point, the Concert King referred to Sharon's husband, Senator Francis "Kiko" Pangilinan, as "your soy sauce, your Kiko-man," to which Sharon agreed, "Yes, he's my toyo."

SOLO ACTS. After their first duet, Sharon left Martin for his solo numbers.

The Concert King sang and danced to the tune of "Give Me Everything Tonight," "Moves Like Jagger," and "Party Rock Anthem"—backed up by the G-Force dancers.

After Martin's first solo set, it was the Megastar's turn to wow the audience.

Sharon performed her own renditions of Adele hits "Someone Like You" and "Rolling in the Deep," with a twist of club or disco mood.

Interestingly, after belting out Adele's hits, Sharon brought out her Blackberry phone and took a photo of the audience.

Sharon, who recently joined "twittersphere" took the opportunity to personally greet and call out to some of her Twitter followers, whom she calls "tweeties."

BROAD REPERTOIRE. "Sharonians" and "Martians" were even more thrilled as their wish to hear many Sharon and Martin hits were fulfilled.

The crowd sang along with the Megastar when she rendered "Kahit Maputi Na Ang Buhok Ko" (which she dedicated to her good friend Garlic Garcia, headwriter of ASAP), followed by "Tawag ng Pag-Ibig," her very first recorded song when she was 13-years-old, "High School Life," and "Mr. DJ."

The Concert King took to the stage and thrilled the ladies in the audience with his own hits—"Ikaw Lang ang Mamahalin," "Each Day With You," and his all-time hit, "Be My Lady."

MORE SURPRISES. Fourteen-year-old Fil-Brit crooner Charlie Green also took part in the concert, and charmed the audience as he sang with Sharon and Martin ang doing his solos later.

Leave it to Martin to bring surprises, not only to the audience but to Charlie as well! He taught Charlie how to sing to a girl.

Later, the Concert King advised Charlie to look for Gary Valenciano, whom Martin referred to as "my dance instructor."

As they spotted Gary V. in the audience, Martin went down the stage and handed the microphone to him to sing the "La la la la" part of their song "Ma Cherie Amour."

In the middle of the concert, Martin called out a couple— Roma and his girlfriend Joy Pablo.

The crowd cheered, while some ladies were teary-eyed when Fritz proposed marriage to his girlfriend Joy.

MORE SOLO ACTS. At one point, Martin grabbed a lady's iPad in the audience and panned its camera for an impromptu music video, while he was performing and moving from one row to the other.

He later performed with his twin sister, Vicky Nievera-Davis, who was in the audience.

Sharon returned to the stage and belted out more of her hits—"Bituin Walang Ningning" and "Sana'y Wala Nang Wakas."

SPOTTED. Seen in the concert were the Megastar's family Mommy Elaine, husband Sen. Francis "Kiko" Pangilinan and their kids Frankie, Miel, and Miguel.

Plus U.S. Ambassador to the Philippines Harry K. Thomas, Jr.

Kris Aquino's sisters Ballsy and Viel, as well as Bam Aquino, were also in the audience.