David Archuleta on his foray into acting: "I'm still not a professional actor but I think I've learned a lot from everything." 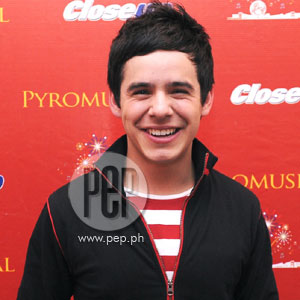 David Archuleta became the main attraction of the Pyromusical competition kick-off at the Mall of Asia Music Hall last February 11, Saturday. He performed two OPM songs, "Nandito Ako" and "Wherever You Are," and his original, "Something 'Bout Love."

It was not the fireworks show but American Idol sensation David Archuleta who became the main attraction at the Pyropalooza kick-off last Saturday, February 11, at the Mall of Asia Music Hall.

Couples were entertained and fangirls swooned over David's performance of two OPM songs—his rendition of Ogie Alcasid's "Nandito Ako" and Southborder's "Wherever You Are"—plus his original song, "Something 'Bout Love."

Before the show, PEP.ph (Philippine Entertainment Portal) had a one-on-one interview with the American Idol Season 7 finalist and Nandito Ako star.

David is scheduled to leave the country after this week, shortly before the airing of his short drama series on TV5, Nandito Ako on February 20.

What does the 21-year-old singer plan to do in the meantime, espcially on Valentine's day?

"I think we have a photo shoot that we have to do," was David's short reply when asked what he will be doing on V-day.

NEW ALBUM. In a few months, David will be on hiatus from his singing career for two years. He will be going on a mission for their church, the Church of Jesus Christ of Latter-day Saints. (CLICK HERE to read related article.)

But in the meantime, he will be recording an album once he gets back to the States. What do his music fans expect from this album?

"So I think what I'm gonna do is kind of like... we're doing the OPM album right now while we're here this week and it's just emotional songs that people know and connect to.

"And I think I'm gonna do something similar back in the States. Songs that people can relate with back at home."

David is not discounting the possibility of making original songs if his time would permit it.

He added, "But also, some other projects as well that are original music.

HIS MISSION. David is not disclosing where he will be carrying out his mission anytime soon.

"I'm just going to one place. I'm not saying yet.

"I'm trying to keep it just low-key so we can be focused on the right things.

"'Cause even though fans do want to know and people are curious... I think it's just out of the courtesy...

"Just to be courteous of the work I want to focus on... also to the people I want to try and focus on, as well.

"So that there aren't any distractions while I'm trying to focus on one thing."

But isn't he worried that being famous will distract him from the real purpose of his mission?

"I think it will be a little distracting but you know, usually I think they try to be very conscious of the place they chose... to make sure that it was somewhere that was quiet, in a way, calm, but still somewhere that is safe.

"So I think they really put thought into that. I'm sure, maybe some people will know who I might be...

"But, usually... even in countries where a lot of people know who I am... like if I go the Philippines or to Honduras where people easily recognize me, when I go out of the city to like, the province area, people don't really bother you.

"So, I think it will be similar on my mission."

ACTING STINT. When he first heard about the acting project being offered to him by TV5, David was not so confident he could do it.

"It wasn't easy for me to get used to but I definitely... I think I improved a lot from the first day.

"I'm still not a professional actor but I think I've learned a lot from everything."

After his acting experience in the Philippines, would it be Hollywood next?

"I usually go by whatever opportunity comes. That's how this came about. It's just the opportunity we needed.

"Even though at first I was like, 'What? No way! Why would I do something like that?'—it ended up being a great decision... very beneficial to my life.