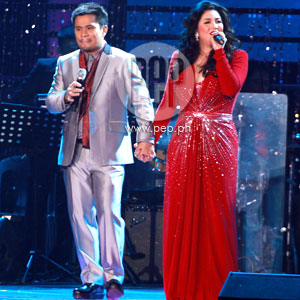 "Thank you for spending your Valentine with us," Ogie Alcasid and Regine Velasquez said during their Mr. & Mrs. A concert, which was directed by Randy Santiago.

Dubbed the Mr. & Mrs. A, his joint concert with wife Regine Velasquez-Alcasid was, as expected, a success!

After their opening, where they did a mash-up of "Without You" and "Moves Like Jagger," the singing couple engaged in repartee.

But their candid and funny spiels were just add-ons.

The "pulu-pulutong ng tao," which was translated by Ogie as "plenty" and "multitude" in English, all came for their first major collaboration on stage as husband and wife and the comeback of Regine after her nine-month hiatus from showbiz.

WELL-APPLAUDED NUMBERS. Their repertoire ranged from pop to '80s tunes to OPM hits.

After the opening, Ogie dished out Bruno Mars's "Marry You" and Train's "Hey Soul Sister," while Regine rendered her version of Beyonce's "Love on Top"—which the singer-actress described as "napakataas naman ng kantang 'yon."

To have the audience feel the Valentine fever, the Kapuso stars picked some OPM hits from the '80s—Ric Segreto's "Don't Know What To Say" and "Loving You," Odette Quesada's "A Friend of Mine," Raymond Lauchengco's "I Need You Back," Sharon Cuneta's "To Love Again," Jam Morales' "Even If," and Iwi Laurel's "Special Memory."

Next, they sang the duet version of "Tayong Dalawa," which was composed by Ogie for their wedding.

A segment was dedicated to the "single sa Valentine" and "bigo sa pag-ibig."

Together, they performed "Separate Lives."

One of the most applauded was the Adele medley of the Songbird.

Her rendition of "Someone Like You" was very poignant; then she turned fierce with "Turning Tables."

But the highlight was "Rolling in the Deep," which was rearranged by musical director Raul Mitra for the concert.

To reminisce the time she became Mrs. Ogie Alcasid, Regine let the people at the Big Dome hear her version of APO Hiking Society's "Pag-ibig (Di Ko Malimutan)," which she sang while reciting her wedding vows last December 22, 2010.

But the crowd's energy was at its highest when Vice Ganda appeared on stage.

In the middle of Regine's song "Minsan Lang Kitang Iibigin," the It's Showtime! host cut in, "Nasaan si Regine?"

Kim Samsoon was Regine's character in a GMA-7 primetime series.

For about 10 minutes, the stand-up comedian's exchange with the Songbird had every one in stitches.

After the "riot" portion with Vice, Regine turned a bit solemn, "I just want to thank Whitney Houston for sharing us the beautiful voice."

She then sang "I Will Always Love You, " "Run to You," and "I Have Nothing," which left the audience gaping in awe.

"Ang taas nun," one of the spectators said.

Just before the finale, there was another surprise: David Archuleta!

Together with Ogie and Regine, they rendered "Nandito Ako," the former's first hit.

The concert closed with "Ikaw Lamang" at past 11 p.m.

So the couple did a mash-up of Black Eyed Peas' "Time of My Life" and Katy Perry's "Firework."

Just before leaving Smart Araneta Coliseum, we asked some in the audience: "Kumusta ang Valentine's Day?"

Their unanimous answer: "Masayang kasama sina Mr. and Mrs. A."