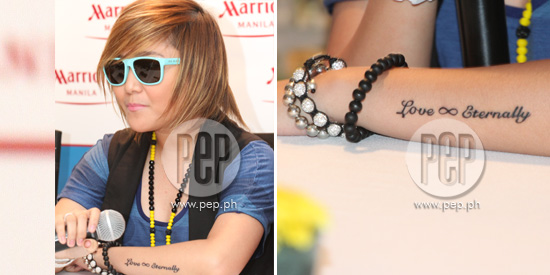 Charice will reunite with fellow "Little Big Star" alumni during her concert tonight at the Smart Araneta Coliseum.

Charice has traded her long black hair for a blonde short hairdo.

The 19-year-old singer is also sporting a tattoo that says "Love Eternally." In between the two words, an Infinity sign has been inked on Charice's left forearm.

The YouTube singing sensation says that she did these changes since she wants her image to be more like Avril Lavigne or Rihanna.

During her press conference held yesterday, March 8, at the Marriott Hotel, Charice told select members of the media: "I know some people are more used to the old Charice, sa ballad singer with the pigtails.

"For me, in my heart, I've always wanted to be more edgy, rock, more [on the] dark side.

"I'm really happy and this is a big deal for me 'coz finally, nararating ko ang mga gusto ko.

"I know some people think that this is very rebellious but it's not. It's just me evolving.

"It's me transforming into another person that is totally me."

Since she has achieved so much in the entertainment scene, both here and abroad, Charice is aware that she is considered to be a role model for a lot of young people.

The singer reveals that the people managing there are two differing opinions being considered for her image.

ON HER LOVE ETERNALLY TATTOO. Charice reveals that she got her tattoo in Singapore just recently.

"This is such a huge step for me and I love it.

"I just don't want to stay a person that I don't like... I've been thinking about it for years and years.

"This is a dream come true for me."

When asked to explain why she chose to have the words "Love Eternally" inked on her left forearm, Charice says: "It's not just a tattoo. It has a meaning for me.

"The tattoo says 'love eternally' and it has an infinity sign. It's for my love for the people, love for my dad, love for everybody, love for my family.

"So, every time I do something, I always have a reason."

What was Mommy Raquel's reaction when she admitted that she wanted to get a tattoo?

"Of course, she freaked out!" says Charice.

Did the death of her father trigger her to do this daring move?

"Everyday, I wake up in the morning, I just move one.

"One of the songs in the concert, I dedicate it to him."

COMMENTS ON HER SEXUAL PREFERENCE. Because of her new look, there are some critics saying that she looks like a lesbian.

When asked regarding her sexual preference, Charice answered: "Why would you ask me that question? I think that's a very inappropriate question.

What if people think she is a lesbian because of her new look?

"This is the look that I want. The only thing that you can do is move on."

REUNION WITH LITTLE BIG STAR ALUMNI. It will be recalled that when Charice was 12 years old, she joined ABS-CBN's talent search called Little Big Star.

They will perform at the Smart-Araneta Coliseum on March 9 and at the Waterfront Cebu Hotel on March 11 for the Philippine leg of her Infinity tour.

She will also be joined by singer-rapper Iyaz. The two collaborated for the chart-topping hit "Pyramid."

According to Iyaz, he got to try balut and he loved the Filipino delicacy, which is a fertilized duck egg with an almost fully developed embryo.

"Not a lot of artists can be themselves so the fact that Charice is being herself and still maintaining her craft is definitely something good."