Xian Lim receives criticism on Twitter too; says feedback will help him improve his acting 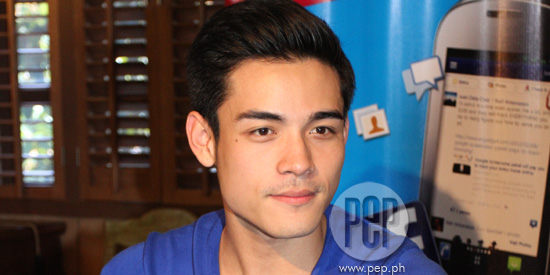 Xian Lim says he has not received the worst of Twitter tirades, only comments that critique his acting.

After capturing hearts in ABS-CBN's recently-concluded primetime soap My Binondo Girl, Xian Lim's face is here to stay on television—and now even on print advertisements and billboards along main avenues.

At the launch of Globe Telecom's new offer at noon today, March 23, at Mario's restaurant on Tomas Morato, Quezon City, Xian was announced as the new face of the company.

"Excited ako. That's all I can say," tells a fresh-looking Xian at the said press conference today.

As the telecommunications company's latest promo offers the unlimited access to social networking sites Facebook and Twitter through Internet-capable cell phones, inquiries on how Twitter bashing against celebrities has gotten out of hand, were hurled at Xian.

Xian states, "Sa mga negative comments about me, I don't really pay attention that much...

The actor says he receives criticism about his acting.

Alongside receiving critiques of his acting, the actor says he has read feel-good ones as well.

"Ang pinaka-nagulat ako was... these past months, nakaka-receive ako ng parang, 'O, I named my baby after you.' Yung mga ganun.

"They were saying they named their baby after me... Kasi yung iba, Lim na talaga yung last name. [So] Xian Lim yung baby!"

"RESPONSIBILITY." Most celebrities these days opt for creating accounts on social networking sites to promote their projects.

Xian Lim has, as of today, 691,479 followers on Twitter, and three major fan pages on Facebook (Xianatics, KimXi, and Team FX) which he himself actively participates in.

How important are the social networking sites in advancing his career?

"It's also a good way to communicate with the fans—kung may gusto ba silang sabihin sa 'yo, kung meron ba silang gustong iparating sa 'yo.

"It's a good way to have that bonding with them kasi they give their full support.

"All you can do is give back by getting to know them more."

Xian mentions that artists who receive rude and nasty bashing on Twitter should learn to sort out the positive remarks from the snide ones.

"So [that's] one versus a hundred thousand. So, pipiliin mo lang..."

Will Xian get back at irresponsible Twitter netizens who will direct bad tweets about him?

"But I'm not going to entertain it... Feel free to say anything you want. It's [your] own opinion."

"You have to be really careful with what you say kasi you might offend other people.

"So, you just take it in. You [just] have to worry about the people who love you, di ba?"