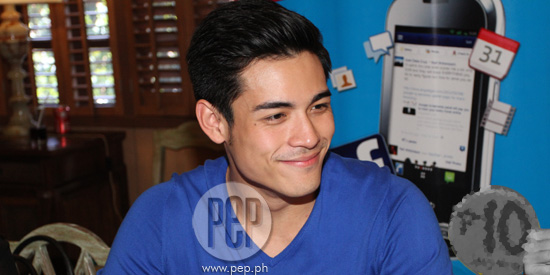 Asked if it is indeed his time to shine, Xian Lim smiles and says, "Oo naman! Ike-claim ko na 'yan, 'di ba? I will claim it!"

Xian Lim waited patiently until the role that would "change everything" landed on his lap. Before playing the attractive Andy Wu in ABS-CBN's primetime soap My Binondo Girl, he was just another charming face in the industry.

After the teleserye debuted in August 2011, Xian's character who was among the three leading men in the soap, unexpectedly captivated hearts, making girls swoon over his teamup with the darling Kim Chiu who played Jade, the Binondo girl.

Perhaps it was because he was paired with fast-rising actress Kim Chiu or maybe it was because Andy Wu's character is like Xian in real life—sleek, neat as a pin, organized.

Whatever—it got him the attention he deserved.

The 22-year-old actor is grateful to those who paved the way for him.

SNIDE REMARKS. Xian also gets his share of negative comments. Some critics say his attachment to Kim Chiu is the reason for his newfound fame.

Xian accepts the remarks and says, "It's normal.

If anything, Xian is quick to admit that My Binondo Girl "played a huge part" in boosting his career. With eight endorsements under his belt, including a popular fast-food chain, a telecommunications company, and a hip urban clothesline, Xian is on his way to becoming showbiz's new "It Boy."

Xian not only credits his success to the other half of his love team, he acknowledges everyone's help as well.

"IT BOY." When one hears Xian singing in a television commercial—"I'm walking on sunshine, oh woah"—with soda float in hand, or sees his winsome face and gorgeous bod on a billboard along EDSA, one cannot deny that he could be the next "It Boy."

Hearing comments like this, Xian does not try to hide his elation.

"Ever since I got sa industry na ito, I've always wanted to ... prove something and now, finally, nangyayari yun.

As the Bible says, "A man reaps what he sows."

"The blessings are here," says Xian.