Katie Holmes will "get nothing" from divorce; reportedly grew tired of workaholic Tom Cruise 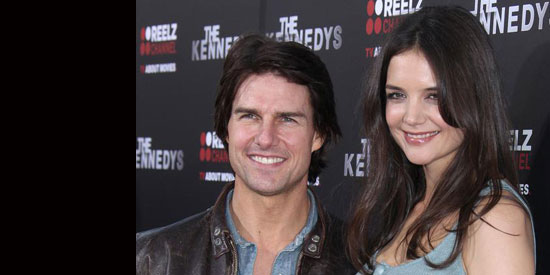 Katie Holmes filed papers last week to legally split with Tom Cruise after five years of marriage, and despite some claims she will receive $3 million for each year she was with the Rock of Ages star, it is believed she will get very little because of their prenuptial agreement.

Katie Holmes will reportedly get ''virtually nothing'' from her divorce.

The 33-year-old actress filed papers last week to legally split with Tom Cruise after five years of marriage, and despite some claims she will receive $3 million for each year she was with the Rock of Ages star, it is believed she will get very little because of their prenuptial agreement.

However, the former Dawson's Creek star—who has six-year-old daughter Suri with Tom—is said to be unconcerned because she makes enough money of her own.

A source told TMZ.com: ''She's not about the money. She's not that girl. She loves to work. Money is not important to her. She makes plenty on her own.''

Katie will only receive what she brought into the marriage, but due to her petitioning to have sole legal and residential custody of Suri, she could end up with a large amount of money in child support from Tom—who turned 50 July 3.

Meanwhile, Katie has reportedly fired her security team because they were too close to her estranged husband.

The bodyguard and driver—who worked for Tom before he met his third wife—were last seen with Katie on June 26 but have not been spotted with her since.

It is not known if they are affiliated with Scientology, the quasi-religion which is believed to be the reason behind Katie's decision to leave Tom as she feared he wanted to send Suri to a boot camp for the cult.

The actress was said be fed up with how Tom was often away from home and never made her or their six-year-old daughter, Suri, his priority.

A source said: ''They had problems for a while. His career came first, and Katie was no longer happy. She wanted him to stay home and spend time together. But Tom has always been a movie star, he knows nothing else. This is a good father and good husband, when present, but ... the work comes first.''

Katie, 33, was also keen for little Suri to have a normal childhood and knew if she stayed with Tom she wouldn't be able to because he is such a big follower of the controversial religion Scientology.

The source added to E! Online: ''She left him because she wanted a better life for herself and her daughter. Suri has no friends. She has no normal life, and it became increasingly obvious, as she got older.

''Katie wants a project where she will remain in a fixed location, where Suri will go to school, have friends, meet children to play, all these things she doesn't do right now. Katie was unhappy in her marriage, so she decided to end it so that her daughter had a happier life.''

It has been claimed Katie left Tom as she feared he wanted to send Suri to a boot camp for the cult religion.