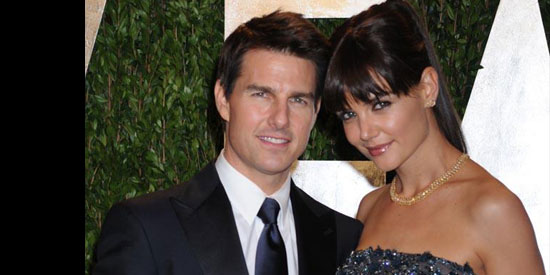 Katie Holmes's attorney confirmed a deal has been agreed between the actress and Tom Cruise, and he thanked the Mission: Impossible star and his representatives for their ''professionalism and diligence'' to bring about such a ''speedy'' decision.

Tom Cruise and Katie Holmes have reached a divorce settlement.

The 33-year-old actress' attorney Jonathan Wolfe confirmed a deal has been agreed between the pair, and he thanked the Mission: Impossible star and his representatives for their ''professionalism and diligence'' to bring about such a ''speedy'' decision.

No specific details have yet been revealed about the settlement, which comes after Katie filed for divorce from Tom after five years of marriage late last month.

Jonathan said in a statement obtained by People: ''The case has been settled and the agreement has been signed. We are thrilled for Katie and her family and are excited to watch as she embarks on the next chapter of her life.

''This result could not have been achieved without the hard work of my partner Gary Skoloff and our co-counsel Allan Mayefsky, Michael Mosberg and Larry Trachtenberg of Aronson Mayefsky and Sloan, and Peter Walzer and Chris Melcher of Walzer & Melcher in California.

''We thank Tom's counsel for their professionalism and diligence that helped bring about this speedy resolution.''

Tom and Katie both confirmed in a separate statement that they are ''committed'' to working on their daughter's ''best interests."

Katie and Tom's representatives, Nanci Ryder and Amanda Lundberg respectively, said in a statement: ''We are committed to working together as parents to accomplish what is in our daughter Suri's best interests. We want to keep matters affecting our family private and express our respect for each other's commitment to each of our respective beliefs and support each other's roles as parents.''

Lawyers for the couple have been in negotiations to settle issues including child custody, visitation and child support for their six-year-old daughter Suri, as well as property division.

Insiders believe the brunette beauty will continue to live with their six-year-old daughter in New York City.

Katie is also thought to have insisted that Suri is accompanied by the Dawson's Creek actress' own team of bodyguards when she visits Tom to ensure she isn't indoctrinated into sci-fi cult Scientology.

A source told RadarOnline: ''Katie insisted that Suri's nanny and bodyguards always accompany her when she visits Tom.

"Katie did this for several reasons. This will ensure a smooth and easy transition for Suri when she is with Tom.

''Suri is Katie's number one priority.

"Tom only has Scientologists that work for him and Katie insisted that her staff will always be with their daughter.

"Under terms of the settlement, Suri isn't permitted to be exposed to anything Scientology related and this includes going to any Scientology churches, parties, etc.

"Katie made sure that this was ironclad in the agreement.''