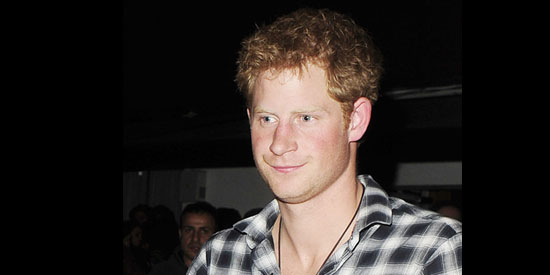 An unnamed girl—who attended the infamous private party in Harry's VIP Vegas suite last week (August 17)—is close to signing a deal to release exclusive shots and mobile-phone footage of the royal cavorting naked with several girls in his hotel room.

The unnamed girl—who attended the infamous private party in Harry's VIP Vegas suite last week (August 17)—is close to signing a deal to release exclusive shots and mobile-phone footage of the royal cavorting naked with several girls in his hotel room.

The lucrative deal includes a live televised interview in the U.S., as well as a number of magazine interviews, the Daily Mirror newspaper reports.

The 27-year-old royal caused controversy after indecent images of him hugging a girl from behind during a game of strip billiards were published online, and the Palace's legal team is said to be concerned that they have no power to stop the $1 million deal from going through.

PRINCE CHARLES IS UPSET. Prince Harry—who is third in line for the throne—has been advised to "lie low" by his father Prince Charles and was given a firm lecture by the royal family upon his return to England.

A source commented: "Charles is not impressed with Harry's antics and thinks he should have known better.

"He has advised his youngest son to lie low and not be seen falling out of any nightclubs.

"He gave him a talking to as any protective father would because he wants to make sure this kind of thing doesn't happen again.

"But he wasn't too unkind. Harry is embarrassed enough as it is."

The party-loving royal is reportedly planning to issue a public apology for his behavior before London's Paralympic Games begin on August 29.

FRIENDS WARNED. Meanwhile, Prince Harry's friends have been warned to be "extra careful" about what they post on Facebook.

In the wake of nude photos of the British prince being published on the web and newspapers, royal aides have warned friends who were at his wild Las Vegas party on Friday to be careful about what they post on social media sites.

A royal source told the Daily Mirror: "Harry's circle of close friends are usually extremely discreet but throughout this trip, they seem to have let their guard down.

"Sensitive information has been posted on Facebook. They think it's all a bit of a laugh but seem to have forgotten they are friends with the queen's grandson and have been warned to be extra careful."

The pictures of the naked prince were taken on a mobile phone after he initiated a game of strip billiards, after he and friends, including Tom Inskip and Arthur Landon, invited a group of women back to their £4,750 per night suite at the Wynn hotel in Las Vegas.