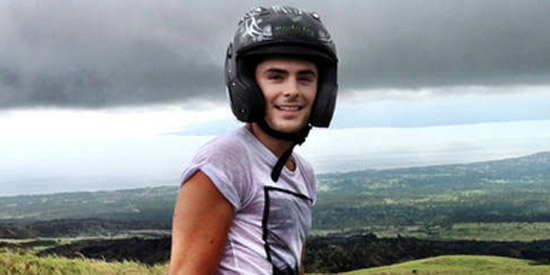 Zac Efron showed how much he enjoyed his short stay in Bicol by sharing this photo to his Twitter followers yesterday, September 28. In the caption, he wrote, “Hey guys! Z here. Rode up the lava flow of Mayon Volcano today. Wishing you the best from the Philippines.” The Hollywood actor stayed in Misibis Bay resort in Albay for two days before coming back to Manila for the Penshoppe Fan Conference at the SM Mall of Asia Arena in Pasay City.

Zac Efron considers his visit to the Philippines as a "dream come true."

So when local clothing brand Penshoppe asked him to be their endorser, Zac did not hesitate to accept the offer.

“They don’t really have to convince me. I’ve always wanted to come out to the Philippines,” said the 24-year-old Hollywood actor in an interview with PEP.ph (Philippine Entertainment Portal), Spot.ph, and Candy Magazine earlier today, September 29, at the Hyatt Hotel and Casino in Manila.

“I was thrilled that a brand like Penshoppe, you know, has an opportunity like this for me and they wanted me to do it.

“I was ecstatic not only because of the brand but it’s also very cool. They gave me a chance to go to the Philippines, which I always wanna do."

Since he was a kid, the High School Musical star has heard things about the Philippines through his father, a former merchant marine who often visited the country in the past.

Zac recalled, “When I was young, my dad used to come out here a lot.

“When I was young, he was always the adventurous type.

“You know, I always admire him for going out and experiencing different culture and seeing the world, specifically the Philippines. So I always wanted to come out here.

“When Penshoppe said that I could do it, I was like really thrilled. I couldn’t believe it—it’s like a dream come true.”

OUTDOOR TYPE. It looks like Zac got the outdoorsy characteristic of his father. This became evident when PEP asked him about the things he wants to do before turning 30.

He replied, “I would love to see more of the world—that’s the best thing.

“That’s one of my favorite things about being in this industry, it opens eyes to different culture.

“I really love to be out there and experience the world. I don’t like to stay at home.

"I like to travel and really explore and immerse myself in different cultures. That’s one thing I love to do.”

He added, “I’d love to skydive. I haven’t skydived yet.

"I wanna climb Mount Whitney and I want to do the affirmation of Israel.”

Mount Whitney is the tallest mountain in the contiguous Unites States.

Here are the other questions that Summit Media team asked Zac during the short interview:

Summit Media: What’s your most memorable experience here so far?

Zac: “My most memorable experience here in the Philippines, so far, is a total surprise.

“I was sort of hiking up the Mayon Volcano and all of a sudden there were 10 ATVs. Like, halfway the trail. So, I was like, ‘Yeah, I’m gonna ride this up the mountain.’

“So, we got ATVs, me, my dad, the whole Penshoppe group got on the ATV on the lava field to the top of the volcano.

“It was one of the incredible views I’ve ever seen in my entire life.

“It was one of the fondest things that I’ve ever done in my entire life. That was pretty cool.”

Summit Media: Can you describe your transition from being a boy actor to a leading man?

Zac: “It’s a journey. It’s a sort of natural progression, you can’t really help it.

“As I continue to work and grow a lot, my aspirations kind of evolve.

“I really enjoyed and I always has enjoyed work.

“It’s challenging and pushes me to grow. You know, it’s a kind of thing that scares me at first, you know.

“I’m just looking for roles that are gonna challenge me and force me to grow.”

Summit Media: If you have a choice, what would be your dream movie role and who would be part of the cast?

“I think every role, when you’re about to do it, it becomes your dream role.

“It’s kind of just, where I am in my life and what’s around at that particular moment.

Summit Media: How about the dream cast?

Zac: “I really enjoy working with my elders, more experienced actors. It changes. I mean, all the people that you think.

“My dream cast right now, I just finished a movie with Nicole Kidman, Matthew McConaughey, and John Cusack—that was a dream cast for me.”

Zac is pertaining to the movie adaptation of the novel The Paperboy. This film competed at the Palme d'Or at the 2012 Cannes Film Festival.