Zac Efron tells Filipinos: "You make me feel so at home. I just want to move here." 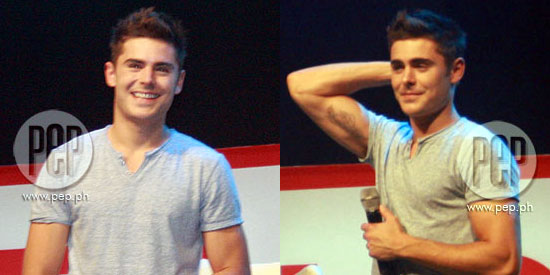 Hollywood actor Zac Efron says he and ex-girlfriend Vanessa Hudgens "clicked right away" when they met each other while doing High School Musical. Zac candidly described his first kiss, which happened when he was in First Grade.

During his first visit to the Philippines, Zac Efron opened up about his first kiss and his chemistry with former girlfriend, Filipino-American actress Vanessa Hudgens.

The Hollywood actor charmed Filipinos at his fan conference held last night, September 29, at the SM Mall of Asia Arena.

TV host Boy Abunda had the chance to interview Zac, whom he described as "one of the most brilliant actors of his generation."

Zac has been staying in the Philippines for several days already.

When Boy asked Zac about his stay here in the tropical country, Zac exclaimed: "It's been absolutely incredible!"

As a kid, Zac grew up listening to stories about the Philippines from his father David, a former merchant marine who often visited the country in the past.

"It's been a dream of mine to come to the Philippines since I was a young boy. Now I'm finally here with all you guys," said Zac with a smile.

What's the best story that he heard about the Philippines?

"My dad told me stories about the food and how amazing all the people were."

What is his favorite food now?

"Balut!" he said, referring to fertilized duck egg, which is considered a delicacy in the Philippines.

The A-list Hollywood actor expressed his gratitude for Pinoys who showed our trademark hospitality.

"The Filipino people are so nice! You make me feel so at home. I just want to move here."

The crowd showed its appreciation by cheering loudly for the 24-year-old actor.

When his movie Hairspray was discussed during his sit-down interview with Boy, Zac praised Pinoys by saying: "I love how musical you are!"

PINAY FOR ZAC? Zac's preference in women was briefly discussed during the interview.

Boy asked the actor: How has your taste in girls changed through the years? What did you like when you were younger as opposed to now?

Zac thrilled the predominantly female crowd when he said: "I think she's Pinoy.

"She might be out here somewhere. She might be all the way up there," he added pointing to the general admission area.

Boy pointed out that Zac will be celebrating his 25th birthday on October 18. Is he already thinking about getting married?

Zac replied: "I don't know. Maybe my wife will hail from here."

This prompted yet another round of cheers from the audience.

Since he has become a household name for his popular roles, how does Zac handle fame?

"It's awesome! You guys rule! I love being up here," he said with a smile.

The actor quipped: "I can do it in four: I love the Philippines."

How did he get the role of Troy Bolton?

Zac recalled, "I'll never forget the day I auditioned for High School Musical. There were like theater auditions and we came in and there were about 40 guys and 40 girls. I met Vanessa..."

At this point, Zac paused as the crowd went wild when he mentioned the name of his former girlfriend, Filipino-American Vanessa Hudgens.

"We clicked right away," he revealed.

What was the best thing that happened to him while doing High School Musical?

"I can't choose just one thing because it totally changed my life but I would have to say, the many friends that I made and the relationships that I made.

"The best part about it is that it let me travel the world and come all the way here and meet all the fans. I really love you guys so much!" he said.

When it was time to say goodbye to High School Musical, Zac admitted that "it was hard, it was very sad."

How did they handle the parting?

"I think we were all crying. It was very hard. We were all so very emotional."

But Zac made an intriguing statement: "But who knows what the future holds?"

In the romantic drama The Lucky One, Zac shot a love scene with Taylor Schilling.

The heartthrob pointed out: "It wasn't difficult. We wanted to make it as real as possible... I feel awkward talking about it."

FAST TALK. For the final portion of the interview, Boy posed several choices for Zac and he would have to choose between the two options as quickly as possible.

Boy: Ultimate dream as an actor
Zac: To do more movies for you guys!

Boy: What makes you happy?
Zac: Being here right now.

Boy: Job you would like to have aside from being an actor.
Zac: Another job? I'd like to be an airplane pilot.

Boy: If you could choose an actor to work with, who would it be?
Zac: There's so many, you can't just choose one. But I like Jack Nicholson, John Travolta, Naomi Campbell, Johnny Depp.

Boy: On a bad day, what do you do?
Zac: I try to do something crazy, I try to go bungee jumping.

Boy: Describe your first kiss...
Zac: I was in First Grade [crowd erupts in cheers] and I think we were playing spin the bottle. I was with a bunch of close friends and we had candles lit, kind of romantic. I spun the bottle perfectly on one girl and we kissed. It was awesome!

Boy: Sing or dance?
Zac: Both, at the same time.

A portion of the program featured several fans who were given the chance to give their messages to the A-list Hollywood actor.

The first girl to give a message held up a sign stating: "Be my first kiss."

Zac was all-smiles as he approached the lucky girl.

After the program and the meet-and-greet session, confetti rained down on the stage.

Zac brought out an iPhone and took photos of the crowd.

"Hey everyone, Thank you so much for an amazing night! Love you guys. Want to apologize to the fans I promised to meet after the show! Security rushed me out quickly, and I'm deeply sorry. - Z"