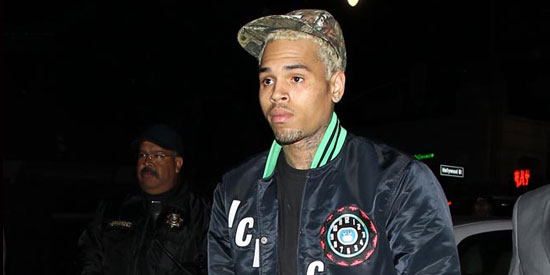 Chris Brown claims he was cut off by "aggressive" photographers leading him to crash and "total" his black Porsche in Los Angeles on Saturday (February 9).

Chris Brown blames the paparazzi for causing him to crash his car.

The "Turn Up The Music" singer—who was recently accused of faking his court-ordered community service records as part of his five year probation for beating his girlfriend Rihanna in 2009—claims he was cut off by "aggressive" photographers leading him to crash and "total" his black Porsche in Los Angeles on Saturday (09.02.13).

A spokesperson for the 23-year-old star, who is attending the Grammy Awards with the "Diamonds" singer, 24, tonight (10.02.13), told gossip website TMZ.com: "The occupants jumped out, with cameras, and aggressively approached his vehicle. In an effort to remove himself from the situation, he began to back down an alley at which point his was cut off by two additional vehicles.

"Chris' vehicle was totalled due to this aggressive pursuit by the paparazzi. He is okay."

A spokesperson for the Beverly Hills Police department confirmed that Chris crashed into a wall, saying: "On February 9, 2013 at approximately 12:03pm, entertainer Chris Brown was involved in a solo, non-injury traffic collision in the 600 Block Bedford Drive/Camden Drive alley. Mr. Brown was the driver of the vehicle and collided with a wall. Brown stated that he was being chased by paparazzi causing him to lose control of his vehicle. Brown's Black Porsche was towed from the scene at his request."

Rihanna, on the other hand, was very worried about Chris Brown after his car crash.

The "Stay" singer—who was seen comforting her boyfriend at a pre-Grammys party just hours after he collided with a wall on Saturday—was extremely concerned by the incident and eager to assist him in any way possible.

A source close to the 24-year-old star told HollywoodLife.com: "Rihanna is just relieved Chris is okay. She was like 'what the f**k' when she heard he lost control of the wheel. She blew his cell up and panicked even more when he didn't pick up. But then he called her back like 20 minutes later and told her he was 'all Gucci' and couldn't pick up because he was talking to the cops.

"After Rihanna talked to him, she took a big ass, deep breath and told him to 'be careful.' She asked if he needed anything, but he said 'he had everything under control. That scared her though. Rihanna knows first hand what it's like when the paparazzi tail you too aggressively. It's got to stop. People are already dying from trying to chase celebrities."

Chris said a day in his shoes is like "a day in hell" during a meltdown on Instagram earlier this week.

He wrote: "I'm wise I can handle the hate but enough is enough yo!!

"Just when everything seems to be going good, some new s**t happens. A day in my shoes is a day in hell, believe it or not!"

The R&B star was not specific about what is bothering him, but if the Los Angeles County District Attorney's allegations of fabricating his community service are upheld, his probation could be revoked.