Gia Barretto-Reyes tells sister Gretchen: "Just totally disappear from our lives without leaving a trail of vile and misery. Please." 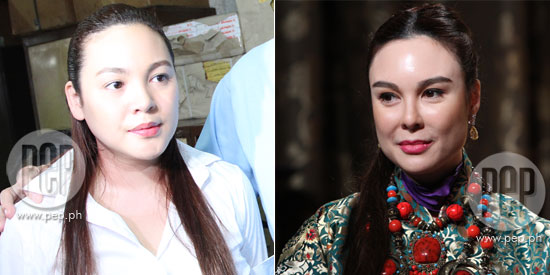 Simula niya, “I respect that you do not want to be part of our family. At this point, we welcome it.

“I say us because you have time and time again made extreme efforts to push us—mom, dad and all of us—away."

“You have hurt us in ways that put the word decency to shame, you have had no rules when you attacked us. If the attack were physical then it would be bearable. Bruises heal. But the attack has always been vicious, below the belt and so evil that the wound borne from it cannot heal.

“It is done repeatedly and unsparingly with permanent damage in mind. You have tried to put mom and dad to shame with empty allegations without thinking that you, whether you like it or not came from them. You ridicule them in front of friend, strangers and us. And, you expect us to just take it."

“Your claims of financial support for this family have no basis, because dad always managed to provide. For the record, we may not have been so rich but we were never poor.

“1. We live in big beautiful houses 2. Slept in carpeted, air-conditioned rooms, 3. Food galore. 4. Put in an exclusive school. 5. Members of exclusive country clubs. 6. We each have our own yayas, yours even a midwife. 7. Driven by chauffeurs.

“Long before you were born and even after you were in show business. At 12 years old, could you have duplicated or taken over this kind of a style, with your meager earnings?"

“We did not have an excess of things but we had what we needed. You were never forced to get into show business.

"I remember very clearly how you ran to the middle of the road when dad said 'no' to you entering show business. He believed that school was important.

"How sad that you cannot distinguish the lies that you make up and reality.”

“No Gretchen, it was not you who helped us during rough spots. It was Claudine.

"You could not in the life of you convince her that our parents were abusive ones. It was difficult for you to accept that there was somebody who actually had pure intentions of helping where help was needed.

“You once told me and I quote, 'I just disappear when things get tough.' You have become great at these disappearing acts.

"Claudine made an effort to be there always.”

"She spoiled all of us not because she needed to but she wanted to. She unlike you, has never equated her value with money or material possessions."

Saad niya, “JJ comments on TV are only credible in as far as he is caught between a rock and a hard place, because he is in your employ.

“It honestly pains me to see that you could put him in this situation. To pick between that and his parents.

"Please stop hounding us like an attack dog. We will admit defeat if you just leave us in peace.

“Just totally disappear from our lives without leaving a trail of vile and misery. Please.

"Enough is enough! Leave us alone. Leave my family alone.”