Albie Casiño admits being changed by his ordeal over the last two years: “I’ve matured a lot faster than I should have.” 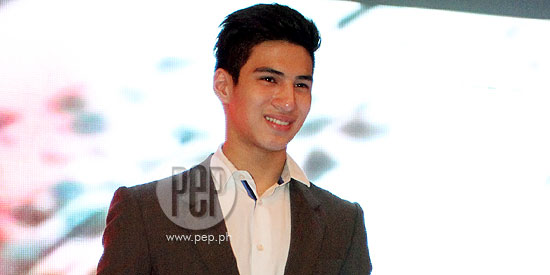 After a rough two years, Albie Casiño returns to primetime television via TV5’s latest action-adventure soap, Cassandra: Warrior Angel. Playing one of the three leading men of Eula Caballero, he takes on the character of a seminarian torn between his calling and the girl he falls in love with.

The young actor, who formerly starred in the hit teleserye remake of Mara Clara, returns to primetime television after getting through a rough patch over the past two years.

In 2011, the showbiz newcomer was caught in a controversy with his ex-girlfriend, actress Andi Eigenmann.

The then 21-year-old Agua Bendita star admitted that she was three months pregnant and Albie, her “first” boyfriend, was the alleged father.

In the succeeding months, Albie’s camp would not own up to Andi’s claims, even after the actress directly mentioned Albie’s name in a blog entry published on September 4, 2011.

Albie’s camp said they would acknowledge the child only after a DNA test. Andi and her family took offense at that statement.

Today, Andi and Albie are no longer on speaking terms.

CASSANDRA. In a grand press launch held Tuesday afternoon, April 30, at the TV5 Broadway studio in Quezon City, Albie was introduced as one of the three leading men of Kapatid network princess, Eula. The other two actors are JC de Vera and Victor Silayan.

The young actor, formerly a Star Magic talent but not yet a TV5 talent, said that he is bound in a contract for this soap alone. Albie is now under talent manager Leo Dominguez.

In a more intimate interview with the press, Albie relayed that he feels jittery about acting again in a teleserye after an absence on TV for two years.

So far, the young actor, who turns 20 years old on May 14, has taped for two days. Albie attended workshops that aided him in understanding his character.

In Cassandra, Albie plays the character of a seminarian. He talked about his role: “His main conflict of course is love for Cassandra, kailangan niya pumili, he has to choose.

“Parang do I choose what I think I want to dedicate myself to, na pagiging pari or give it up all for love, di ba?

“Of course, di naman ako makaka-relate dun. I’m not a priest. I’m not planning to be a priest,” Albie said, amused at his remark.

He continued, “In a way, all forms naman of love, you give up something for it, e.

“His whole life, he was brought up to do this. Alam mo yun? Yung kaba niya [na], 'What if this doesn’t work out with Cassandra?'

Asked if he worries about how people will receive his comeback on primetime after the controversy, Albie said that he does not bother to think about it.

“You won’t be able to please everyone talaga.

“So for me, why would I try to please the people that I don’t know?” the young actor retorted.

LEAVING STAR MAGIC. During the interview, Albie made it clear that he did not leave Star Magic just because of the controversy.

“Nung una, my main issue talaga is my schooling, e."

He added, “With Star Magic, sa sobrang dami nilang artista, it’s hard to be flexible with the schedule.”

At the moment, Albie is an incoming sophomore at the College of Saint Benilde, taking up his undergraduate degree in Export Management.

He said that he aims to finish his studies while attending to his career in showbiz.

Meanwhile, another issue was hurled at Albie, whose onscreen tandem with Kathryn Bernadro in Mara Clara came before the teen actress’s loveteam with actor/singer Daniel Padilla.

Does he think the “KathNiel” loveteam would not have earned the strong following it has today if he had not kept away from the limelight?

Does he believe it was destined?

Albie agreed, “Everything happens for a reason naman, e.”

CHANGED. Has the young actor moved past the controversy? Does his accepting of this project and appearing again on the small screen mean that he has moved on?

Albie relayed, “Kahit naman I didn’t take the role, I think naka-move on na ako after a while.

It no longer hounds him he said, nonetheless it has changed him.

“It just changed… na-affect ako as a person.”

FATE. During the interview, Albie recounted how he accidentally landed his previous role in Mara Clara. It’s funny how he never wanted to be an “artista” in the first place.

It was during the commercial shoot of his brother for Milo a few years back that the winsome Albie was discovered.

Has Albie figured out today why he was given that break in Mara Clara and now this role?

He is convinced, however, that he is meant to be an actor.

“[But] it’s where I am pa rin, di ba? Siguro may reason talaga yun kung bakit.

“I just have to find out why.”

Will this new role help him figure it out?

He pointed out, “I don’t want to think about it too much na ‘Bakit kaya? Bakit kaya?’

“It will drive you crazy!

LESSONS. Albie recognizes the fact that this project is a chance for him to prove his talent or even redeem himself.

But he said he that he tries not to think about it.

“'Yan yung another thing na natutunan ko rin. You can’t look too forward in the future.

“Actually, you can’t look to the future at all.

“Kasi in everything you do, may one million reactions na puwedeng mangyari, e.

“The chances of your future playing out the way you imagined, sobrang labo nun, e.”

A lesson on friendship he imparted, “When it comes to relationships, quality over quantity any day.

“I mean, I would rather have three friends but yung talagang matalik mong friends other than a hundred na ‘What’s up?’ friends.

“I have a lot din pero lumiit yung circle ko.

Regarding love, on the one hand, Albie admitted to being traumatized by his previous relationship.

He brought up the word “trust.”

“I won’t just easily give my trust to someone now. Basta like I said, I’m more reserved now talaga, e.

“I’ll be in a corner by myself, usually have my iPod on, nagsa-shy away ako from interaction with other people.”

Did he use to be sociable?

“It’s the same pero you have to earn it [trust] muna.

“I won’t be the one to go out there and try to be friends with you.

“If you show me you’re a genuinely nice person, di ba? You’re being nice talaga then, why not, of course, di ba?