YES! probes on estranged relationship of the famous but controversial Barretto family 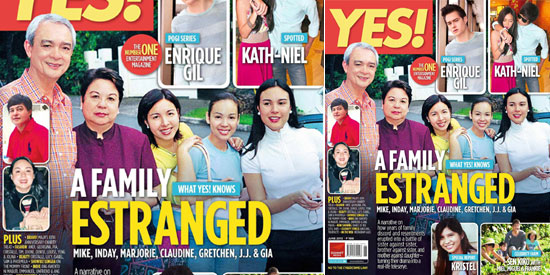 A digital edition of YES! is also available for international subscribers. For subscription details, visit http://www.pep.ph/. For your daily dose of celebrity news, you can like us on Facebook at http://www.facebook.com/yesmagazine.ph; or follow us on Twitter at http://twitter.com/Y

Gretchen and Claudine’s brother J.J. Barretto grants YES! magazine a sit-down interview to paint a clearer, and hopefully better, picture of how things really are in the Barretto household.

In a bittersweet tone, J.J. recalls their childhood years in Cebu, their hard-up beginnings in Manila, and the comfortable life when Gretchen—the first of the three Barretto girls to become an artista—entered show business and started earning income from her movie and modeling projects.

J.J. also answers the allegations and claims of his mother Inday Barretto and sister Gia, punto por punto: from Inday’s first open letter to Gretchen that she sent to The Philippine Star on April 24, 2013, to Gia Barretto’s official statement that she sent to YES! magazine’s online affiliate, Philippine Entertainment Portal or PEP.ph, on May 2, 2013.

Most importantly, where are Claudine and Gretchen, the two focal characters believed by many to be the ones silently orchestrating this very public battle that pitted mother against daughter, sister against sister, and sister against brother?

This issue also includes a feature on Enrique Gil, the fourth heartthrob in our monthly POGI Series; a tour of Senator Kiko Pangilinan’s farm in Alfonso, Cavite; and a collection of paparazzi-style photos of your favorite celebrities!

We also have a special report on Kristel Tejada, the first-year University of the Philippines-Manila student who took her own life in March after allegedly failing to pay her tuition.

Be in the know on the latest showbiz updates and happenings when you grab a copy of YES! magazine, now available in newsstands, bookstores, and supermarkets nationwide for only 100 pesos.