Bea Alonzo talks about her past and present lovelife in July issue of YES! 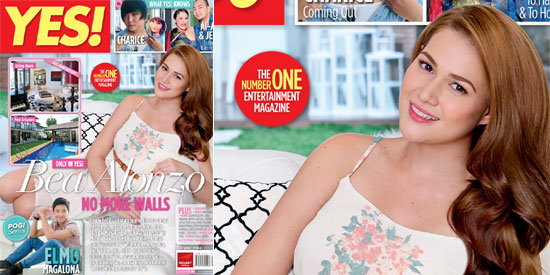 Bea Alonzo explains why she refused to talk about her private life before, “Ayokong magpakilala sa tao—that was my decision, and wala kayong alam sa tungkol sa ’kin."

This July, YES! Magazine pays a visit to one of the best actresses and brightest stars of her generation—Bea Alonzo—in her brand new home located in an exclusive subdivision in Quezon City.

Bea, who is also one of the few celebrities who are able to keep their private life really private, opens the doors of her three-storey sanctuary that took almost a year to build and decorate, in the style of what her interior designer calls “urban Asian glam.”

She also opens up about her father whom she has not met; her early struggles in showbiz; her perennial love team partner John Lloyd Cruz; her first boyfriend, Mico Palanca; her whirlwind romance with Gerald Anderson; and her current love, Zanjoe Marudo.

The 25-year-old mestiza beauty describes her foreigner father as “the missing puzzle in my life” and John Lloyd as “talagang magaling magpakilig.”

Find out from Bea herself if her favorite leading man attempted to court her.

Also, her recollections of her two failed romances: “A, unang-una, kami ni Mico, hindi talaga kami magkaintindihan,” she says of her first boyfriend.

As for Gerald, she clarifies, “The breakup happened before we went to London.”

She adds, “Parang there was an agreement between us na we were going to act as a couple in London. But after, wala nang talk. Para masaya ’yong last moments namin together. Kasi hindi pa puwede talaga. You and me against the world ang drama. Hindi ko kaya. Hindi ko talaga kaya.”

Bea also looks back at her first meeting with her boyfriend of two years, Zanjoe Marudo.

And how they became friends and ultimately, lovers: “Nanliligaw naman siya talaga, in fairness naman sa kanya. Pero hindi ’yong moment na ’yong ‘I love you, do you love me?’ Walang gano’n.”

The July issue of YES! magazine also delves into the controversies involving international singing sensation Charice, who grants a sit-down interview, as well as box-office comedy star Ai-Ai delas Alas and her husband Jed Salang. Plus, Elmo Magalona’s profile in the Pogi Series.