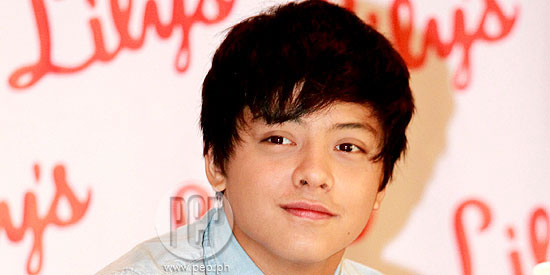 Daniel Padilla’s side-swept, fringed haircut, while a huge part of his appeal, has apparently become a thing to pick on by his detractors alongside his singing voice.

At a press conference that announced the teen heartthrob’s endorsement of Lily’s Peanut Butter, yesterday, July 2, Daniel firmly told off those who are making a big deal out of his choice of haircut.

Recently, his hairstyle obtained more attention when Charice started sporting the same cut alongside her coming out.

On social media, many commented on the similarity between Daniel’s and Charice’s hairstyle the moment the YouTube sensation turned international artist’s photos went viral on the Internet.

Daniel expressed his frustration over the unnecessary attention that some people are giving over the said matter.

Daniel feels that he is nowhere near Charice’s achievements.

Asked, on a lighter note, if he sees his hairstyle as his lucky charm, Daniel replied with a grin, “Hindi naman! Ito lang yung bagay sa akin.