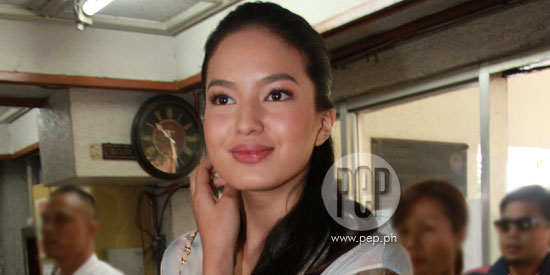 THE MEETING. Unang inilahad ni Sarah ang meeting niya kay Annette “before the end of December of 2011 or first week of January 2012.”

Inilarawan ni Sarah si Annette sa kanyang affidavit bilang “one of the Directors of GMA Network, Inc. and a consultant to the Office of the Chairman and CEO, Atty. Felipe Gozon, who happens to be her father.”

Kuwento ni Sarah, “[S]ometime before the end of December of 2011 or first week of January 2012, my handler, Respondent MICHAEL UYCOCO, called my mother and told her that we have a meeting with Respondent Abrogar at Friday’s restaurant near Rembrandt Hotel in Tomas Morato St., Quezon City to discuss about my career;

“Quite confused that Respondent Abrogar called a meeting outside of GMA office, I, together with my mother promptly attended said meeting being called by a GMA executive;

“That when my mother and I arrived at Friday’s restaurant, Respondents Abrogar, Uycoco and the head of Talent Development and Management Department (TDMD) of GMA, Respondent ARSENIO ‘ARSI’ BALTAZAR III, were already there;

“That I was surprised that Respondent Abrogar told me that to be able to boost my career and have more projects and endorsements, I need to sign a co-management agreement with Icons Celebrity Marketing [ICONS] which would deduct a 15% commission;

“Vexed, I asked Respondent Abrogar if GMA Network, Inc. knew this because as far as I know, GMA shall be my ‘sole and exclusive manager’ as per the contract I and my mother signed with it.

“Likewise, I find it revolting that 40% management commission [25% for GMA and 15% for ICONS] will be deducted from my talent fee;

“That I was reprimanded by Respondent Baltazar for asking said question saying that an executive of GMA, Respondent Abrogar, was already the one directing me. Likewise, he said that ICONS is very good in exposure, branding, and imaging, which is the weakness of GMA;”

NOTHING TO WORRY. Patuloy ni Sarah, sa kanyang affidavit, “Respondent Abrogar furthered that I have nothing to worry because the 15% commission for ICONS shall not be immediately deducted, the deduction shall start only when a lot of engagements were made by ICONS for me.

“She also informed me that a lot of GMA artists already signed with ICONS and they are priorities in terms of projects and endorsements, thus, I should likewise do the same;

“That before we left, Respondent Abrogar gave the number of Respondent ALBERT ‘BEBONG’ MUNOZ with residential address at 18D. Reynaldo St., Tierra Bella, Quezon City, to my mother. She ordered my mother to immediately contact him;

“Feared for my career, I, through my mother, immediately phoned Respondent Muñoz who seemed expecting our call;

“Thereafter, Respondent SHIELA BUENDIA, the head of talent management division of Icons started bugging us for a meeting. One of her text messages to my mother using her cellphone number [number withheld] was on January 3, 2012 at 18:19 which states, viz: ‘Hi tita! Would you have an available sked for the meeting already?’

“That due to incessant follow ups of Respondent Buendia, I was constrained to accede to meet them. Thus, respondent Muñoz in his text message to my mother using his cellphone number [number withheld] dated January 4, 2012 at 10:35 in the morning directed us, viz:'Hi. Let’s meet at Chelsea at Podium. It’s right by the mall entrance.'

“That in Chelsea, my mother and I met with Respondent Muñoz, my handler at GMA, Respondent Michael Uycoco, Respondent Andrew Dee… who is the President of Icons and a woman who I presume the secretary of Respondent Dee;

THE PROPOSAL. “There they affirmed to us the directive of Respondent Abrogar regarding the co-management but as opposed to Respondent Abrogar, Respondent Muñoz said that the 15% commission of Icons shall be immediately deducted from my incurred talent fees.

“The meeting was ended by Respondent Muñoz telling us that the proposed management contract will just be sent to us via email;

“On January 16, 2012 at 12:46pm, my mother received an email from Respondent Munoz using his email address, which states:

As discussed, attached is the draft contract for your review. If the terms are acceptable, you can simply send an email stating 'Sarah and I accept this agreement.' Then we can set a separate meeting to sign in person.

Copied in this email is Shiela, who heads our talent management division. She will also coordinate with you.

1. SCOPE: TALENT hereby appoints ICONS to be part of TALENT’s management team as personal manager in all branches of the entertainment industry, including exclusive talent management services in relation to XXXX

2. OBLIGATION OF PERSONAL MANAGER: ICONS will collaborate with GMAAC (GMA Artist Center) to provide the services required to manage the activities XXXX

4. CONSIDERATION. In consideration for the services by ICONS, TALENT agrees to pay fifteen percent (15%) commission of gross earnings for ALL shows/projects closed during the term of this contract.XXX”

“That since me and my mom had to fly to Switzerland at that time, my mother merely told them that we will consult my father first regarding this matter;

“That even before I returned to the Philippines, Respondents Buendia and Muñoz impatiently sent an email to my mother on February 7, 2012.

“Provided hereunder is the February 7 email of Respondent Buendia to my mother copy furnished Respondent Munoz, which states:

Hope things are going well. We would just like to check if you have already reviewed the attached contract. Would like to get feedback from you so we can prepare the next steps since Sarah’s new show is starting very soon.

UNFAVORABLE. Patuloy na kuwento ni Sarah, “That we came back from Switzerland on February 23, 2012. A few days as courtesy, my mother called Respondent Muñoz and informed him of our refusal to accept the co-management proposal as this would be against my contract with GMA and we found the 40% management commission unconscionable;

“However, they still kept on contacting my mother. Until February 29, 2012, and my mother received a shocking text message from Respondent Buendia which states, viz:

Hi tita, sorry I was asleep na po when u sent ur message. I think we need to clarify po re the percentage. For regular shows po 80 percent will be left because GMAAC will get 5 percent only and then icons 15 percent. And then we also work on a higher tf for hr so she’s not lugi. J is it ok if we ask for a mtg with you to clarify? J”

“That I found this offer, although favourable to me, very UNFAIR to GMA which is supposed to be my exclusive manager. Thus, for my love and respect to GMA which discovered me, I REFUSED said offer and their co-management proposal without the blink of an eye!;

“Thinking that I did the right thing, contrarily, I tasted the ‘payback’ for said refusal. I felt the coldness of Respondents Abrogar, Baltazar and Uycoco to me who even made work hard and my environment hostile to me;

“I started going to tapings without my handler, Respondent Uycoco. Instances of mismanagement such as double bookings which in one instance even made Mother Lily very furious and disappointed to my extreme embarrassment.

Saad ni Sarah, “Thinking that I really need a co-manager, I signed a co-management contract with Annabelle Rama Gutierrez but I was shocked when GMA reprimanded me as this is not allowed when it was even Respondent Abrogar, a Director of GMA, who told and offered me of ICONS as co-manager. Thus, I signed in good faith believing that co-management is allowed;

“Confused on what to do, I sought refuge to the top management of GMA who includes the father of Respondent Abrogar. There I was furnished with the records of the investigation which even more threatened and intimidated me in not signing with ICONS;

“I was furnished with an email sent to Atty. Felipe Gozon affirming my allegations that there are indeed a lot of talents of GMA, even exclusive talents of GMA, who signed with ICONS and enjoying their career in flying colors and Respondents are involved with this. Attached hereto is the Memo dated November 21, 2012 which Atty. Felipe Gozon sent to the executives of GMA as well as the email he received...

“Relevantly, there is a letter by MYRNA VILLANUEVA a.k.a. ‘Tiya Pusit’ to Atty. Felipe Gozon of GMA stating how influential are Respondents, who are ICONS executives, that they have the power to ban talents/artists in GMA.

"That with the involvement of Respondent Abrogar, the daughter of Atty. Felipe Gozon, in this anomaly I did not know who to trust in GMA anymore, thus, I asked for the rescission of my contract with GMA and to get out from this fuss to have a vacation in Switzerland first.

“To erase any color with by signing with Annabelle Rama Gutierrez as co-manager, I decided also to terminate my co-management contract with her;

LIBEL CASE. “That this did not stop, Respondent Abrogar. To add fear and intimidation to me, Respondent Abrogar even filed a criminal complaint for libel against me in the Office of the City Prosecutor of Makati City for my alleged defamatory posts in my tweeter account.

“This is despite the fact that there is still no law implementing ‘internet libel’ in the Philippines as the Cybercrime Law criminalizing internet libel is still suspended via a Temporary Restraining Order (TRO) from the Supreme Court.

“I was not given the chance to answer said charge as preliminary investigation was conducted when I was already in Switzerland;

“That due to my intense fear, I could not go back to the Philippines and a warrant of arrest was issued against me which branded me as ‘criminal,’ ‘fugitive’ and other terms of similar meanings not only in the Philippines but more painfully in the land of my father.”

“That for the acts of the Respondents in compelling me to sign in the co-management contract with ICONS which is not only against my will but against my existing contract with GMA Network, Inc., through the means of threats and intimidation, I am charging them for the crime of Grave Coercion under Art. 286 of the Revised Penal Code as amended by Republic Act 7890 which provides, to wit:

Art. 286. Grave Coercion. The penalty of prision correccional and a fine not exceeding six thousand pesos shall be imposed upon any person who, without any authority of law, shall by means of violence, threats or intimidation, prevent another from doing something not prohibited by law, or compel him to do something against his will, whether it be right or wrong.

“That the fear and intimidation I experienced was beyond description, I being so young, foreign to this country, and new in the showbiz industry was banged by big personalities not only in the industry but in the whole country.

“Accordingly I was informed by my lawyer that there is ‘intimidation when one of the parties is compelled by a reasonable and well-grounded fear of an imminent and grave evil upon his person or property, or upon the person or property of his spouse, descendants or ascendants, to give his consent. Intense fear produced in the mind of the victim which restricts or hindered the exercise of the will is sufficient.’ (Alejandro, et.al. vs. Atty. Bernas, et.al., G.R. No. 179243, September 7, 2011).

“Lastly, I trust the Honorable Investigating Prosecutor that in the spirit of justice, he/she will be blinded on the stature of the Respondents and will determine my case fairly and judiciously so as lowly individuals like me will have the same courage to protect their rights.”