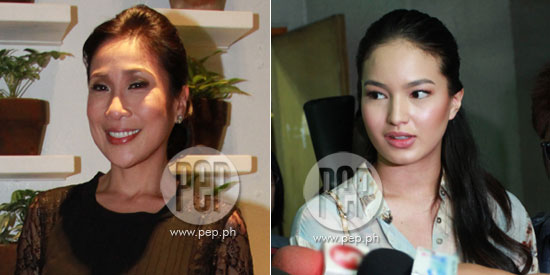 Saad ni Sarah, “[O]n January 2013, on the light of the exposure I made to GMA top executives regarding the dealings of Icons Celebrity Marketing (ICONS) which secures management contracts with exclusive GMA talents through Respondent and the head of Talent Development and Management Department (TDMD) of GMA, Arsenio Baltazar III, she filed before this Honorable Office a criminal complaint against me for libel on the basis of my alleged defamatory tweets.

“That this is despite the fact that as a lawyer, she knew that Republic Act 10175, otherwise known as the ‘Cybercrime Prevention Act of 2012’ criminalizing ‘internet libel’ is still suspended by virtue of the indefinite Temporary Restraining Order (TRO) issued by the Honorable Supreme Court;

“That relevantly in said complaint-affidavit which she subscribed and sworn to before the Office of the City Prosecutor of Makati, specifically in paragraph 15 hereof, she said, viz:

15. Respondent Lahbati’s libellous statements are untrue. I have never forced any GMA artist to enter into an agreement with ICONS. More particularly, I never forced respondent Lahbati to sign with ICONS. In fact, she and her mother were the ones who insisted that she be given more endorsements and more assistance in branding and imaging. She and her mother asked me whether ICONS can do a branding plan for her. This was the reason why I gave her the contact details of the executives of ICONS, a company that offers branding and imaging services to some GMA artists, after which I have no knowledge of their dealings with said company. XXX

“That by materially using those statements, she indicted me for libel. Thus, paragraph 21 of her complaint-affidavit states, viz:

"NOT TRUE." “Relevantly, in said portions of her Complaint-Affidavit, Respondent alleged that me and my mother were the ones who inquired about ICONS and whether it can do branding plans for me;

“That this is NOT TRUE! I never knew ICONS until she and Arsenio Baltazar III, the head of TDMD, told me about it in a meeting they called for in Friday’s restaurant in Tomas Morato, Quezon City sometime in late December 2011 or first week of January of 2012;

“As a matter of fact she ADMITTED this during the investigation made by GMA sometime in November of 2012 on this matter.

“Significantly, in paragraph 5 of said affidavit, she ADMITTED, viz:

“That Arsenio Baltazar III concurred this statement in his response to the show cause directive he submitted to GMA dated November 21, 2012. Relevant portions of said letter-response state, viz:

1. XXXX I was the one who facilitated the meeting with Ms. Lahbati in December of 2011 to discuss to her TFMD’s strategy on how to build her as one of the stars of GMA. (no.1, paragraph 2 of the letter)

“That to convince this Honorable Office that I can be indicted for internet libel, she stated in paragraph 18 of her Complaint-Affidavit, viz:

In the case of Chavez vs. Court of Appeals (G.R. No. 168338, February 18, 2008), the Supreme Court recognized that the internet and other forms of broadcast media share similarities, hence, the rationale and regulations apply to both.

The emergence of digital technology—which has led to the convergence of broadcasting, telecommunications and the computer industry—has likewise led to the question of whether the regulatory model for broadcasting will continue to be appropriate in the converged environment. Internet, for example, remains largely unregulated, yet the internet and the broadcast media share similarities, and the rationales used to support broadcast regulation apply equally to the internet. Thus, it has been argued that courts, legislative bodies and the government agencies regulating media must agree to regulate bot, regulate neither or develop a new regulatory framework and rationale to justify the differential treatment.

“That this statement of the Respondent in her Complaint-Affidavit is not only misleading in mockery of this proceedings but a blatant assertion of falsehood!;

“Foremost, there is NO such jurisprudence entitled Chavez vs. Court of Appeals tackling the issue of internet libel;

“The statement she quoted in paragraph 18 of her Complaint-Affidavit is not in Chavez vs. Court of Appeals but in the case of ‘Francisco Chavez vs. Raul M. Gonzales in his capacity as the Secretary of the Department of Justice and National Telecommunications Commission, NTC’, G.R. 168338 decided by the Honorable Supreme Court NOT on February 18, 2008 but on February 15, 2008. However, said jurisprudence is not about internet libel but the issue is about violation of Anti-Wiretapping Act versus Freedom of the Press, Speech and Expression;

“Verification of said case would reveal that this involves the spread of “Hello Garci” tape, or the audiotape which contains the alleged conversation of Former President Arroyo and COMELEC Commissioner Garciliano directing the latter to manipulate the elections in her favour. Raul Gonzales, in his capacity as DOJ Secretary released a statement warning all persons including the press to stop airing said tape because this would be tantamount to violation of Anti-Wiretapping Act. NTC, on the other hand released an Order stating that it will suspend or revoke the permits and licenses of radio and television stations if they continue airing said audiotape;

“That one of the arguments raised in said case is whether or not broadcast media enjoys lesser constitutional guarantees than print media, thus, the discussion on fair treatment to broadcast and print media. It is there that the Honorable Supreme Court discussed about the internet as a form of broadcast media but it never made a decision, it merely made an obiter that maybe, 'courts, legislative bodies and government agencies regulating media must agree to regulate both, regulate neither, or develop a new regulatory framework and rationale to justify the differential treatment.'

“As a matter of fact, in said case, contrary to what the Respondent advocated in her Complaint-Affidavit, the Honorable Supreme Court ruled in favour of freedom of the press, expression and speech. For the information of the Respondent, the dispositive portion of said case reads, viz:

In VIEW WHEREOF, the petition is GRANTED. The writs of certiorari and prohibition are hereby issued, nullifying the official statements made by respondents on June 8, and 11, 2005 warning the media on airing the alleged wiretapped conversation between the President and other personalities, for constituting unconstitutional prior restraint on the exercise of freedom of speech and of the press.

LIABLE FOR PERJURY. “That based on the foregoing, I humbly but vehemently submit that Respondent is liable for perjury under Article 183 of the Revised Penal Code of the Philippines with the following elements, to wit:

“That the accused/respondent made a statement under oath or executed an affidavit upon a material matter;

“That the statement or affidavit was made before a competent officer, authorized to receive and administer oath;

“That in that statement or affidavit, the accused/respondent made a willful and deliberate assertion of a falsehood; and

“That the sworn statement or affidavit containing the falsity is required by law or made for a legal purpose.

“Indubitably, the complaint-affidavit for libel she filed before this Honorable Office is under oath before a subscribing prosecutor and that she made said complaint affidavit for the legal purpose of baselessly charging me of a criminal offense;

“That in said sworn complaint-affidavit of her contains the falsity that I and my mother were the ones who asked about ICONS and if it can do branding plans for me when in truth and in fact she and Arsenio Baltazar III were the ones who told me about ICONS as she knows that it manages talents also. She even gave the contact number of Bebong Munoz, the executive of ICONS and ordered my mother to call him immediately.

“That Respondent made said assertion of falsehood deliberately and wilfully because this statement is material to establish my alleged malice in posting the tweets. Thus, to be within the ambit of Brillante vs. Court of Appeals, the jurisprudence she cited in her complaint-affidavit;

“That her mention of alleged Chavez vs. CA is material to convince this Honorable Office that I can be indicted for internet libel;

“That due to said untruthful statements of her I was indeed wrongly indicted for libel and for a very young age branded as ‘criminal’ and “fugitive” which caused me tremendous pain and damages;

“That I am executing this affidavit to charge herein Respondent for the crime of Perjury under Article 183 of the Revised Penal Code of the Philippines.”

Aniya, "I haven‘t received anything from her lawyers but if it‘s true, then I welcome it since she‘s now fighting in the proper venue. Now the public will know what the truth is."