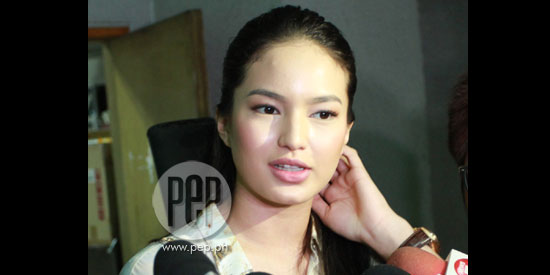 “This is to clarify the confusion that arose regarding the incident on Monday, July 15, 2013.

“Last Monday, my client, Sarah Lahbati, merely subscribed and sworn to her Complaint-Affidavits as she was set to leave the country on the night of Tuesday, July 16, 2013.

“When she arrived on Thursday night [July 11], the schedule was she would post her bail on Friday [July 12] then she will file all the necessary cases against Atty. Annette G. Abrogar, et.al.

“However, after the posting of her bail on Friday, the hearing for her arraignment was set late in August, which is August 22, 2013, at 8:30 in the morning.

“Sarah told me that she would just leave the country on Tuesday and will just go back on the week of her arraignment. Thus, I decided to just have her subscribed and sworn to her complaint-affidavits so even if she is not here I can file all the cases.

“The same case with her mother, who is a witness in her grave coercion and perjury complaints, as she will be leaving the country on the third week of July, I had her subscribed to her affidavits before the Office of the City Prosecutor also.

“I was advised by the docket section of Makati and Quezon City to just file them either on the last week of July or first week of August, so the hearings for said cases will be on the week of August 22, when Sarah is already in the Philippines.

“What is important is the Complainant has personally subscribed and sworn in to them and her lawyer can do the filing [be received by the office of the city prosecutor].

“On Monday, I was surprised when I arrived in the hall of justice of Quezon City and there were media, I think from all television stations and print.

“Sarah was on her way already so I called her and informed her of the presence of media.

“Sarah was even hesitant to come out of the car so even if she was long been at the city hall, she was not going out of the car. I advised her to come out and just face them so we could do what we were set to do.

“Members of the press could attest that Sarah came very late from the time I arrived and that she was shying away from the media when she entered the hall of justice.

“Overwhelmed with the enormous number of the members of the press, crowding us even during the time of the subscription, I failed to discuss about the legal process and the essence of the complaints anymore. Besides, media became more concerned on issues about Sarah.

“As my client became quite irritated for continuously bringing up the pregnancy issue during the interview, she opted to cut the interview short and immediately left the hall of justice.

“As all the members of the press could attest that I did not go to the docket section of the office of the city prosecutor of Quezon City to have the documents be received by said office, I assumed that the press knew that what Sarah only did at that time was to subscribe and swear in to her complaint-affidavits.

“In the afternoon, we went to the Office of the City Prosecutor of Makati to have Sarah swear in to her complaint for perjury against Atty. Annette Abrogar.

“As we were expecting media already, I asked Sarah to be ready already. This is the reason why in the afternoon Sarah changed already her clothes and totally made up.

“After the subscription, I allowed Sarah to face the press. This is the reason why during this time everyone would notice that she was more relaxed and was able to finish the interview.

“I remember it was also during this time that I told the members of the press that Sarah would be leaving the country soon so I had her subscribed to her complaint-affidavits first before she leaves so at the time she returned on Aug. 22, on her arraignment, there would already be schedules for the hearings for preliminary investigation for these cases.

“No one asked me questions about this as I believe the press is more concerned to hear much from Sarah. We left also without going to the docket/receiving section of the office of the city prosecutor to have the documents be received by said office. Members of the press witnessed this as some of them were even with us inside the elevator when we went down of the building.

“As on the night of July 15, Sarah mentioned to me about the article in the Philippine Daily Inquirer, I drafted her complaint for libel also on that night, finalize it on Tuesday morning, and had it subscribed and sworn in by Sarah in the afternoon of July 16, 2013.

“On the same night, she left the country.

“It was only yesterday that Lei [Alviz] of GMA News informed me that in all news articles, it was mentioned that Sarah already filed her complaints on Monday. She likewise asked me if it was true that Sarah also has a libel complaint against Atty. Annette Abrogar.

“To clarify the confusion, I was the one who even asked Lei if I can release a statement clarifying that matter so it would not appear in public that Sarah filed three cases in just two days. Thus, my interview shown in 24 Oras yesterday.

“As far as I know, Channel 5, through MJ Marfori, likewise aired my clarifications already as I have read her article in Interaksyon online.”

“Well, I really don't know but Lei told me that when they went to City Hall of Quezon City on Monday, they received a text message from an anonymous sender that ‘Sarah is set to file criminal cases’ on Monday.

“I was surprised to learn that and up to this point I am still trying to ferret out who sent that text messages.”

Patuloy ni Atty. Abraham, “Now I cannot blame the media why even before we went to City Hall and Sarah subscribed to her affidavits, may mga news na from social media na magpa-file or magsasampa ng kaso si Sarah nung umaga ng Monday.

“Siguro kaya wala na ring nagtanong sa ‘kin sa Hall of Justice when are we going to file the cases Sarah subscribed to, at ako naman, I failed to explain na rin.

“I do not know who sent this text message but I believe this is where the confusion arose.

“This is the reason why members of the press assumed that when Sarah subscribed to her complaint-affidavits, she already filed the case as subscription leads to filing of criminal cases.”

“I mean, Atty. Annette knows this more being in the media business. As far as I remember also kasi, when she filed her complaint for libel against Sarah, the whole copy of the complaint was reproduced and quoted on GMA News even before Sarah receives the complaint.”

“Subscription really leads to filing as we will indeed file those complaints, the Respondents will still receive their copies of the subpoenas attached the complaint-affidavits, and the preliminary investigations to these cases will still be set... it is just a matter of time.

“This is a simple confusion which I believe both parties should not take as a big deal.

“I humbly submit that miscommunication on the date of the filing is not substantial RATHER let us concentrate on the cases.

“Personally, I trust and I believe Pañera [Atty. Abrogar], that she would face the cases head on and would not be distracted by this petty and irrelevant matters.”