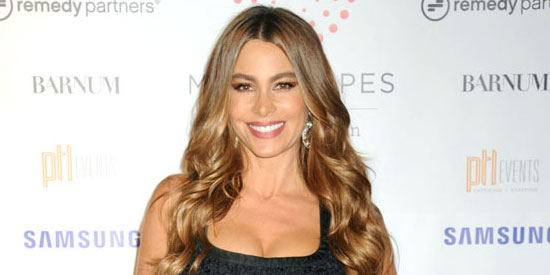 Sofia Vergara has topped Forbes' list of the highest paid US TV actresses for the second year in a row, after banking $30 million.

Sofia Vergara has been named the highest paid US TV actress for a second year running.

The Modern Family star reportedly earned a whopping $30 million between June 2012 and June 2013, from both her role on the hit sitcom and numerous endorsement deals, which is more than double the income of her closest rival, Law & Order: Special Victims Unit actress Mariska Hargitay.

The Colombian beauty is thought to have commanded big bucks from mega-deals with companies including Diet Pepsi and Kmart due to her popularity in Latin America, a growing market in the business world.

Sofia, 38, has her own clothing line with supermarket chain Kmart—for which she was paid a staggering $7 million advance—as well as deals with the soft drinks company, furniture chain Rooms to Go, cosmetics brand Covergirl, Comcast, State Farm Insurance, and more.

The brunette beauty's $30 million windfall puts her comfortably ahead of Mariska, 49, who earned $11 million over the last year, according to financial magazine Forbes.

Reality TV stars, the Kardashian sisters, Kim, Kourtney and Khloe—who are considered actresses by Forbes for the purposes of the list—come in fourth place with $10 million between them, but they share the position with Grey's Anatomy leading lady Ellen Pompeo, The Heat star Melissa McCarthy, 30 Rock creator-and-actress Tina Fey, and former reality TV star Bethenny Frankel.

Sofia topped the list in 2012 with earnings of $17 million, making her $30 million payday all the more impressive.