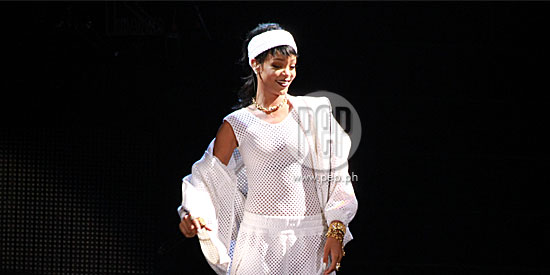 Rihanna tells Pinoy fans how much she missed them since her 2008 concert in Manila.

For the second time around, international singer Rihanna took Manila by storm last night, September 19, as she brought her Diamonds World Tour to the Mall of Asia Arena.

The "Where Have You Been" singer arrived and left the city on the same day, as she continues to travel the world in her private jet.

For the Manila leg of her concert, Rihanna donned an all-white ensemble composed of a head wrap, mesh onesie, sports jacket, basketball shorts, and sneakers, which she worked by adding or removing a piece from time to time.

A sporty-looking Rihanna, wearing all pieces of the outfit, opened the show with the tracks "Mother Mary" and "Phresh off the Runway" from her latest album Unapologetic.

For her second set, the Barbados-born singer took off the jacket and grooved to her reggae-influenced songs, such as "You Da One" and "Man Down."

She also rocked to heavy-riffed tracks like "Rock Star" and "All of the Lights."

The crowd went wild when she did "Umbrella," the song that sealed her status as an international music icon.

Rihanna soon stripped off the shorts and used her jacket as a wrap around skirt, invoking a sexier vibe as she did a medley of her club hits, including "We Found Love," "S&M," and "Don't Stop the Music."

As the crowd got high on her music, she stepped off the stage to mingle with the lucky front-row audience.

Apparently, several showbiz celebrities were standing there and got to shake the hand of the six-time Grammy winner.

Anne Curtis, Isabelle Daza, and Liz Uy, via their posts on Instagram, said they were among the lucky ones who got to touch Rihanna.

But, as Liz says, it was Vice Ganda who's the "luckiest mother effer" of all.

First, Rihanna handed the microphone to him to sing along with her, "but all the It's Showtime host could mutter was 'I love you, I love you' and then he gets a compliment from the style icon who said, 'I love your hair!'"

Finally, Rihanna closed the show stripped down to her onesie, showing off her well-toned figure, singing her recent hits "Stay" and "Diamonds."