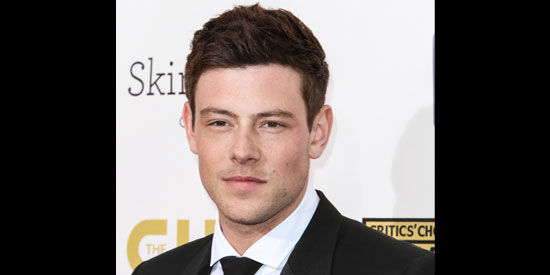 Lea Michele and Chris Colfer are seen sobbing in the first footage from Glee's tribute episode to the show's lead actor, Cory Monteith, which will air next week in the U.S.

Glee has unveiled an emotional promo for its Cory Monteith-tribute episode.

The hit musical TV show has released the first footage from its tearful homage to the actor—who died from a combination of heroin and alcohol abuse in July—which is set to the tune of Bob Dylan's "Make You Feel My Love," performed by Cory's real-life girlfriend, Lea Michele.

Producers have decided to kill off Cory's character Finn Hudson, and the episode, which airs in the U.S. next Thursday (October 13), will see his grief-stricken fellow glee club members come to terms with his death.

Chris Colfer's Kurt Hummel, for his part, is seen crying as he clings on to Finn's varsity football jacket.

Discussing the tribute at a Q&A screening of his other show, American Horror Story, yesterday (October 3), executive producer Ryan Murphy admitted that most of the scenes were filmed in one shot because the cast and crew found it incredibly tough to shoot the emotional episode.

He said: "What you will see in the episode is what really happened.

"Those performances that you'll see, almost everything in that episode is from the first take of every performance, because the actors and the crew had a really hard time shooting it.

"I've never seen a crew that you can't continue shooting because they've left the room sobbing. It was very hard.

"I struggled even working on it because what you're seeing is what they felt not just about Finn but Cory."

Recovering addict Cory was found dead at the age of 31 in a hotel room in Vancouver, Canada, just months after completing a stint in rehab.