Gian Magdangal denies third party caused breakup with Sheree: “Anybody can say that.” 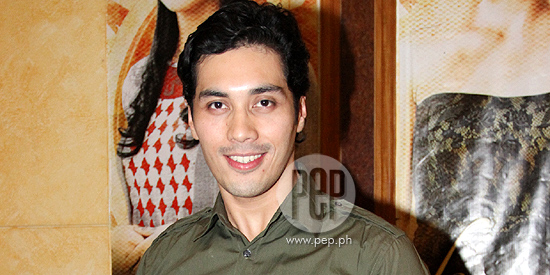 Reacting to the claim of his former live-in partner Sheree that he has no plans of marrying her, Gian Magdangal says, "Those are events that are bits and pieces of a big story that nobody else will understand." The 31-year-old singer/TV-theater actor adds, "There’s no point in arguing with someone else who’s not part of the two-way conversation that we’ve had."

The singer-actress confirmed the end of her six-year relationship with Gian in an interview with PEP.ph (Philippine Entertainment Portal) late last month.

The cause of their split, according to Sheree, was Gian’s alleged refusal to take their relationship to another level.

Sheree said, as told in the article, Gian seemed to have no definite plans of marrying her.

COPING. Last Monday, October 14, at the press conference of the classic musical Grease, at the Raffles hotel in Makati, Gian disclosed how he has been coping with the split.

The 9 Works Theatrical production of Grease, where Gian will reprise the role of Danny Zuko, has been keeping him busy, apart from attending to his duties as a father.

“I’m just really concentrating with work and every time I have with Haley, my son…

“But, you know, things change and I really got to pick up myself.”

Gian evidently has been going through a rough patch from the look of his thinning face and frame.

He relayed, “I think anybody who has any relationship that probably went through something, or ito, nagkahiwalay kami ni Sheree…

“Kahit ano namang mangyari, di ba? Basta you make sure that you don’t hurt each other.”

He and Sheree are on speaking terms, Gian said.

“We always talk every day naman. Di naman yung parang war or anything like that, hindi…”

Asked how his son is doing, Gian said they’re taking it day to day.

“I tell him that, 'Today you’re sleeping with Daddy, and tomorrow, I will bring you to Mama’s house and you’ll sleep there.'

“Nobody’s a perfect parent. Parenthood is something that’s very delicate.

Gian said that he is trying his best to be like his parents, who have been married for 31 years.

“That’s what I’m all about—family.

“That’s why I’m concentrating on work so that, eventually, if things go better, I’d be able to step up.

“The most important thing is that we’re talking and we’re in good terms,” Gian asserted.

Is a reconciliation between him and Sheree possible in the foreseeable future?

The TV-theator actor said that answering for him and Sheree would be unfair at this point.

“I think, eventually, in time, we will know the answer to that question. But right now, I don’t know, honestly.”

NO THIRD PARTY. During the interview, Gian was asked to comment on Sheree’s statements regarding the cause of their separation.

He answered, “For someone to say something like that, that’s just a bit of the whole story.

“And the whole story’s ours to keep. And I just want to keep it like that.”

He was asked also whether there was a third party involved—in particular La Diva member Aicelle Santos. Gian dismissed the allegations.

“I can say something also, but I’m not that guy.”

Is it true that he keeps a photo of Aicelle in his wallet, as claimed by Sheree? Tthe actor quipped, partly in jest, “Marami naman akong picture sa wallet ko, e!”

Turning serious, he said, “Those are events that are bits and pieces of a big story that nobody else will understand, you know what I mean?

“If she tells that bit of a story, you’re forced to ask me a question. And if I answer something about that question, it will just lead to blah, blah, blah, blah.

“So, there’s no point in arguing with someone else who’s not part of the two-way conversation that we’ve had.”

WORK HELPS IN HEALING PROCESS. Gian’s saving grace at the moment is being in the production of Grease.

He mentioned that working with the cast, especially with lead actress Frencheska Farr, has been a “fun” experience so far.

The actor told that performing aids in his healing process.

“Apparently, this is the only work I have right now…”

Will Sheree be invited to catch his play?

That Gian is certain of.