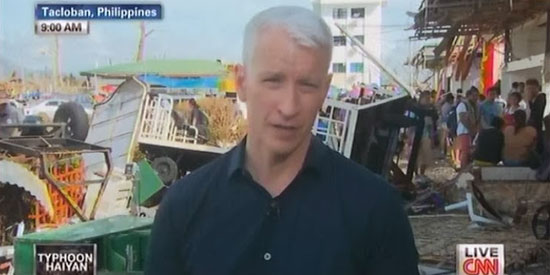 Anderson Cooper defends CNN coverage of Yolanda devastation: "Accuracy is what we care most about here at CNN. We’re giving information that might actually help people on the ground, and help the relief effort in some way, to become more efficient. In our reporting it seems, out here in the Philippines, it has become something of a political issue at times.”

“Miss Sanchez is welcome to go there and I would I urge her to go there.

"I don’t know if she has... But her husband is the Interior Minister, I’m sure she could arrange a flight."

Sabi ni Anderson tungkol kay Korina: “A radio broadcaster named Korina Sanchez has been taking issue with some of my reporting.

"She’s also not just a radio broadcaster, she is actually the wife of the Interior Minister, who’s overseeing the relief effort on the ground."

Dagdag niya, "Miss Sanchez seemed to be under the mistaken impression that I said I saw no presence of the Philippine government on the ground in Tacloban.

"I never said that.

"Obviously, I’ve been on the ground in Tacloban for days.

“As for who exactly is in charge of the Philippine side of operation, that is not really clear.

"I am just surprised.

"I expected on this Day Five, I thought I may have gotten here very late, that things will be well in hand—it does not seem like that.

"People are desperate, they do not have any place for shelter.

"It’s very difficult for people to get food, neighbors are helping out neighbors, water is in short supply.

"It is a very very bad situation here.”

“The doctors there said they did not have enough food.

"They did not have enough water for the hundreds of people they were seeing every day.

"They didn’t have enough medical supply.

"That’s a clinic at the airport.

“If any clinic in the entire disaster zone should be able to receive aid quickly and easily, it's the clinic at the airport.

"And they were not getting it.

"I don’t know what the situation there is today, but I certainly pray to God that it is a better situation than it was even two days ago."

Saad niya, “If you’ve been watching the coverage over the past week, you know that we’ve been on the ground in Tacloban and elsewhere, trying to be accurate as possible.

"Accuracy is what we care most about here at CNN.

"We’re giving information that might actually help people on the ground, and help the relief effort in some way, to become more efficient.

"In our reporting, it seems, out here in the Philippines, it has become something of a political issue at times.”

Saad niya, “The President of the Philippines has also counseled foreign journalists that they should be accurate in their reports, and I certainly appreciate that counsel.

"Acurracy is what we strive for.

“I read in the paper today... this is the first time I was able read the news.

"I would actually say that.

"In every report we’ve done, we’ve shown how strong the Filipino people are.

"The Filipino people, the people of Tacloban, in Samar, in Cebu, and all these places where so many have died, they’re strong not just to survive this storm.

"They’re strong to have survived the aftermath of the storm.

Emosyunal na pahayag pa ni Anderson, “Can you imagine the strength it takes to be living in a shack, to be living, sleeping on the streets next to the body of your dead children?

"Can you imagine that strength?

"I can’t, but I see that strength day in and day out here in the Philippines, and we honor them in every broadcast that we do.”