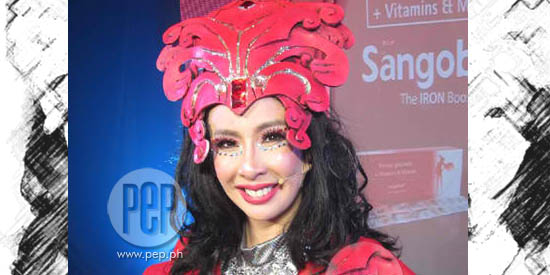 Giselle Sanchez provided comic relief at the thanksgiving party of Sangobion, which donated money to the Philippine Red Cross.

Christmas is a "peak season" for Giselle Sanchez.

And since she believes that it is also a “time for family and friends,” her agreement with husband Emil Buencamino and kids Lia, 9, and Zappa, 4, is that they allow her “to make raket all I can during the first part of Christmas.”

Giselle is a favorite host for company events, which normally keep her busy throughout December. This year, however, her hosting gigs began only on the second week of December because of super typhoon Yolanda.

In a one-on-one interview with PEP.ph (Philippine Entertainment Portal) on December 18, the Salaminkera of Sangobion said: “I must admit that this December is a little bit sad. Para din akong na-Yolanda because all my shows got canceled from December 1 to 14.

“Because parang nahiya yung mga corporations na mag-throw ng party, and then yung talent fee ko and the whole party itself will be donated to the Yolanda.”

HELPING YOLANDA VICTIMS. Kidding aside, Giselle was truly generous in donating what she calls her “time, treasure, and talent.”

“And then I've been participating in several fundraisers.

"In fact, this January 12, I'm heading the artists’ group. I'm looking, I'm the one contacting the artists to participate in the LBC fundraiser.

“In Resorts World naman, we're proud to announce that we generated P8 million.

"Yes, that's the show with Martin Nievera, with Mitoy Yonting, Pops Fernandez, Lani Misalucha, The Voice [of the Philippines] talents, and a lot of other talents.

Giselle also did a fundraiser with fellow Boholano Cesar Montano for the benefit of the victims of the October 15, 7.2 magnitude earthquake that hit Bohol.

CHRISTMAS CUSTOM. Back to her "rakets"—the showbiz term for money-making gigs—she made sure her December 24 and 25 will be free.

“Although this New Year's, I will be celebrating New Year's with the OFWs in Korea. So I'm looking forward to it, I'm bringing my family, my mom and dad. So it will be fun.”

How will her family celebrate Christmas?

“Christmas eve, siyempre divided na iyan, ‘no? To my family and Emil's family, so we end mga 2 to 3 [in the morning].

Does she help in the preparations?

“Not me," she quickly replied. "I don't prepare. I just attend.

"Attending is sobrang nakakapagod. So, you can just imagine the pagod of the people preparing.

“I'm not used to that kasi, siyempre, I come from a family na we just celebrate Christmas eve and sleep the whole Christmas day.”

But even if it is tiring for her, she says, “We have to do this for the families.”

Her other reason: “…my children love it.”

TECH-SAVVY SANTA. Speaking of children, do they believe in Santa Claus?

“But he thinks Santa is like a very tangible person. Like, for example, he sees the Santa in the mall, he thinks that's the real Santa. So like, niyayakap niya, tumatalun-talon siya, gano'n.

“So I make him believe.

"But, of course, Lia, she knows that Santa is not real.”

When she was a kid, “Di ba dati, parang Santa's like a saint talaga? Ang hirap maabot, you don't see him."

But these days, she would tell Zappa, “'O, I texted Santa. You're so naughty I'm going to text Santa now,’ ganyan. Matatakot yun, magpapakabait talaga siya.

And Zappa remembers what she tells him.

“Because dun sa mga 'I emailed Santa,’ so parang now, ‘Let's write a letter so we can put it in Christmas tree.’

Lastly, while work means a lot to her, family will always be priority for Giselle.

“Alam mo, it's a matter of balance naman, and also saying no to, pag ano na, pag kailangan. And yes, choosing your projects also.”