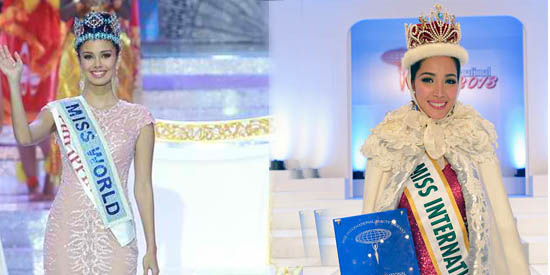 2013 is a big year for Filipina beauty queens—two of whom bagged such major titles as Miss World for Megan Young and Miss International for Bea Santiago.

For Filipinos, 2013 is a mix of triumph and tragedy.

TRAGEDIES. Typhoon Yolanda struck the country this year, leaving 6,109 fatalities, according to the December 22, 2013, count of the National Disaster Risk Reduction and Management Council.

The number of fatalities is expected to rise, however, with the latest count by the Philippine National Red Cross on the missing alone pegged at 22,000.

But with whole towns devastated, with many bodies in mass graves reportedly uncounted, and with whole families wiped out and thus leaving no one to look for kin, this number is considered still too low.

But already, 22,000 is a far cry from President Noynoy Aquino’s estimated 2,500 deaths, given in an interview with CNN. Before the typhoon struck, Aquino had announced a zero-casualty goal.

The typhoon casualty may also include 1 presidential ambition—that of Interior Secretary Mar Roxas—partly due to a viral 18-second video clip showing him dragging political issues to the forefront of the tragedy.

Not that Tacloban City Mayor Alfred Romualdez, who is in the same video clip, is off the hook. He definitely did not prepare his city properly, adequately, or wisely for the onslaught of the biggest typhoon to ever make landfall in world history, even when his own website had been announcing that a big, powerful one was coming.

And not all tragedies were even caused by nature.

On December 16, a Don Mariano bus fell off the Skyway, killing 18 people. The bus line's owners had been allowing threadbare tires to hit the road, and their driver was going at full speed.

CONTROVERSIES. During the ongoing Yolanda relief operations, an uncounted number of trucks distributing goods were seen with a tarpaulin showing the face and seal of office of Vice-President Jejomar "Jojo" Binay.

This left a bad taste in the public's mouth.

Then, before the year ended, a seeming abuse of power involving Binay's children came into full view.

Binay’s convoy of 4 vehicles had insisted on going through a village exit already closed by that hour, in accordance with village association rules. The Binay party, led by Jun Jun, launched a verbal tirade which turned dangerous when his security detail began loading up with bullets and bringing out the long arms.

The show of mayoral force ended with the 3 security guards being hauled to the Makati police headquarters and held for questioning for "almost 4 hours," according to newspaper reports.

Worst, the Vice-President came right out to defend his children, saying his mayor son "deserved some courtesy."

This is not the only Binay family controversy this year.

At a time when political dynasty is resurfacing as an ugly term, Nancy Binay became the target of controversy for running in the senatorial race in 2013's mid-term elections.

Most of the heat zeroed in on her perceived lack of credentials for the position of solon, but she still ended up being elected to the Top 5, garnering 16,812,148 votes.

This is now seen as the current Vice-President's show of political muscle, a preview to the 2016 elections when he's expected to run for President.

In the incident which happened in the early morning hours of November 23, and which PEP first reported on December 1, Anne had slapped 3 club guests one after the other, including box-office star John Lloyd Cruz, and had harangued starlet Phoemela Baranda with the now viral line: "I can buy you, your friends, and this club."

Strangely, after Anne herself had admitted her mistake—"Most of it is true"—Phoemela denied, both online and on TV, that the incident happened, releasing a statement that she admitted first getting approval for from Viva Artists Agency, which manages her career and Anne's.

At least 7 members of the Barretto family—with the Barretto matriarch Inday leading the charge—exposed each other’s secrets in the media, igniting countless debates on who's right, who's wrong, and if sharing family problems with the public is the way to resolve their issues.

At the center of the maelstrom is showbiz's once-dominant actress Claudine Barretto, who is now embroiled in around 9 court cases, most of them with estranged husband Raymart Santiago and 2 of them with a former Personal Assistant whom she caused to get jailed for allegedly stealing from her.

Folk singer Freddie Aguilar, age 60,married his girlfriend, age 16, despite overwhelming public disfavor because: one, the girl is a minor; and two, their age difference is 44 years.

A billion-peso corruption controversy also erupted in the news, starring Janet Napoles and several members of the Senate and Congress, including showbiz actors Jinggoy Estrada, Bong Revilla, Tito Sotto, and Lito Lapid. This has resulted in calls for million-people march protests.

TRIUMPHS. Thankfully, 2013 was not all grief. There were pockets of celebration.

this year was definitely a year for Filipino beauty. Here’s a rundown of winners:

Megan Young is first on the list, bagging the Miss World crown and becoming the first Filipina to win the title.

Mutya Johanna Datul is also the first Asian and Filipina to win the Miss Supranational pageant, outshining 80 contestants for the title.

Ariella Arida is third runner-up in the Miss Universe contest held in Russia.

Koreen Medina is third runner-up at the Miss Intercontinental in Germany.

And most recently, Bea Santiago bags the Miss International crown in Japan.

The triumphs are not limited to beauty contests.

The Philippines landed at the top of this year’s World Championship of the Performing Arts.

In the same contest, first place winners also include Reynaldo Gorospe as the Male Model of the World, and the Gollayan Sisters as the Vocal Group of the World—both in the Senior Grand Champion division.

In the world of sports, celebrations were also in order.

In the recent SEA GAMES, the Philippine delegation won a total of 100 medals: 29 gold, 34 silver, and 37 bronze. Still small, given our population of roughly 100 million people, but big enough to feel good about in a year of slim pickings.