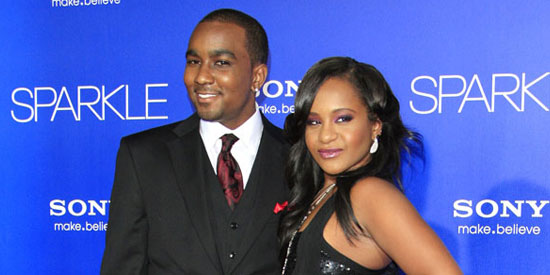 Bobbi Kristina Brown got her grandmother Cissy Houston's blessing before she married Nick Gordon earlier this week, even though Cissy previously criticised their relationship.

Bobbi Kristina Brown got her grandmother's blessing before she married Nick Gordon.

The daughter of the late Whitney Houston tied the knot with her long-term beau, 24—who was informally adopted by the legendary singer at the age of 12—earlier this week, but is planning a much bigger ceremony in 2015 to celebrate with their family, including Whitney's mother Cissy Houston.

Asked if she got permission from her grandmother, who questioned whether Nick was good enough for Bobbi in an open letter last year, before getting married, the 20-year-old star told gossip website TMZ.com: "Yes, I did. She's very happy."

Nick, who insisted they are "officially" married, added: "We did. We saw her at our cousin's sweet sixteen and she gave us her blessing."

The couple, who live in Atlanta, Georgia and are hoping to honeymoon in Fiji or the UK, also claimed Whitney would have been thrilled for them.

Nick said: "This is what she wanted."

Her new husband also confirmed the couple are planning a much more lavish celebration next year, and said: "You know what, next year the ceremony will be beautiful. It will be very intimate."

Bobbi and Nick announced their engagement in October 2012, during her family's short-lived reality series The Houstons: On Our Own, but their unconventional love was met by widespread disapproval.

The pair called off their engagement shortly afterwards, before recommitting in July 2013.