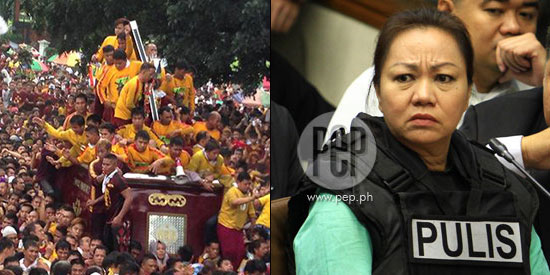 Blogger Raissa Robles wrote on her page that Janet Lim-Napoles would occassionally have the statue of the Black Nazarene delivered to her house. (Left photo from this link: Black Nazarene reaches Jones Bridge)

Last weekend, social media was abuzz with talks of corruption in the Catholic Church, ignited by an article that blogger Raissa Robles wrote on her website.

On January 9, Robles wrote a blog post, titled "How to get a personal home visit from the Black Nazarene," alleging that Janet Lim-Napoles, before her incarceration for serious illegal detention of an employee, would occassionally have the statue of the Black Nazarene delivered to her house.

The Black Nazarene is said to be miraculous.

Every January 9, its feast day, it is paraded on the streets of Manila in an epic procession on the way to the Quiapo church, where thousands of people amass to touch its garment, such as the one held last week.

According to Robles, the custodian of the Black Nazerene, Monsignor Josefino Ramirez, helped facilitate its delivery to the Napoles mansion.

In several statements, Msgr. Ramirez defended his action by saying that the Napoles family deserved to have the statue for themselves, because Janet's mother helped the Church's charitable efforts in the past.

Robles, however, contends that Napoles gets house calls from the Black Nazarene not because of charity, but because the priest regularly gets thousands of pesos from her.

Msgr. Ramirez has also been implicated in the ongoing investigation of the PDAF scam as the head of one of Napoles's bogus non-governmental organizations, which allegedly launder millions of pesos from the public funds.

Robles hits both Msgr. Ramirez and the whole Catholic clergy for keeping silent on the issue, noting that other priests have come to the defense of the monsignor.

This is not the first time that priests of the Catholic Church have been accused of corruption.

Critics of the Church had bandied the term "Pajero bishops" to refer to several members of the Church who received luxury vehicles from the Arroyo government.