Piolo Pascual reveals he was on the verge of quitting showbiz 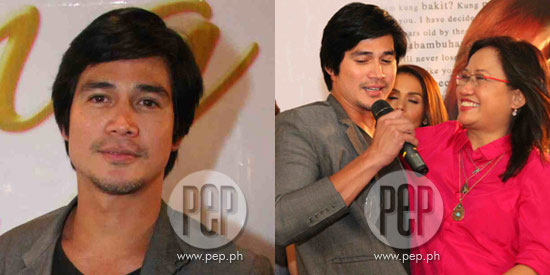 Piolo Pascual reveals he wanted to quit showbiz to have more time for his son Iñigo. However, his son discouraged him from leaving the entertainment industry. Starting Over Again director Olivia Lamasan (right) disclosed she had a "tampuhan" with Piolo but she has already forgiven the actor.

Piolo Pascual was emotional when he admitted that he already made plans to quit showbiz.

The Kapamilya actor made this startling revelation last night, March 4, at the 9501 restaurant at the ABS-CBN compound.

Piolo held back tears when he faced select members of the media and guests invited to the victory party of Starting Over Again.

Directed by Olivia Lamasan, this movie features Piolo in a love triangle with Toni Gonzaga and Iza Calzado.

The 37-year-old actor admitted, "I was seriously considering quitting this year pero when the movie became a big hit, I said the joke is on me. I guess hindi pa po time para umalis ako sa showbiz.


"I was ready to settle down in the States.

"When I did the film, tinanong sa akin, 'Ano ba ang motivation mo?'

When PEP.ph (Philippine Entertainment Portal) asked Piolo why he felt the need to leave showbiz, he pointed out:

"One of the reasons why is because I wanted to devote more time sa anak ko [Iñigo].

"That's one of the factors and parang gusto ko rin naman magpahinga, so iyon...

What was the reaction of his son to his decision to quit showbiz?

Piolo recalled, "When I told him that, 'You can't quit yet because I still wanna see you on TV.'

"I think it was a sign for me not to leave yet.

"There are some things na out of our control.

"I was planning something else, but I guess ABS-CBN had a different plan.

Does that mean Piolo will still remain in the entertainment industry?

He replied, "I think I'm not in a position to say na hanggang dito na lang ako.

SETTLING IN THE UNITED STATES? The director of Starting Over Again, Olivia Lamasan, disclosed that the actor opened up to her while they were still shooting their movie.

What was her reaction when Piolo told her about his decision to quit showbiz?

The lady director said, "Sabi ko, 'Why would you do that?'

"Sinasabi niya na he's giving himself some time and then he's going to leave.

"He has already laid out plans for himself, for his life, get a business, and settle in the States.

"I fervently prayed that mag-hit itong pelikula for him.

"In fact, during one of our pictorials, magkatabi kami and sabi ko, 'Anak, I'm praying that this movie makes it with the ending that we have for you.'

"When the movie made it, sobra akong masaya for him."

TAMPUHAN WITH DIREK OLIVE. In her speech during the program, Direk Olivia admitted that she had a grudge against Piolo, but she did not reveal the reason why she got angry at the actor whom she first directed in the movie Milan (2004).

"I never thought that I could be so insensitive through the years...

"If not for Inang, I think hindi ako makakabalik.

"Pero maraming salamat po for the belief and the trust for making me a part of your life again."

His voice broke as he continued to thank the people who have helped him in his career.

"When she said that you guys never lost hope, para po akong nabuhayan. Thank you for not giving up on me.

"It was so personal. When I read it, naiyak po ako.

"Thank you for not giving up on me.

"Tita, sorry for all the pains I caused you."